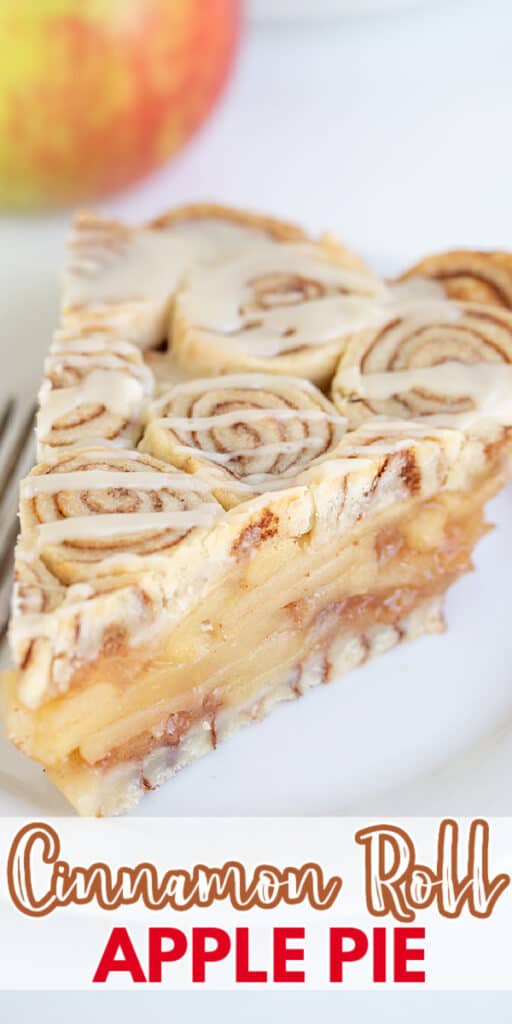 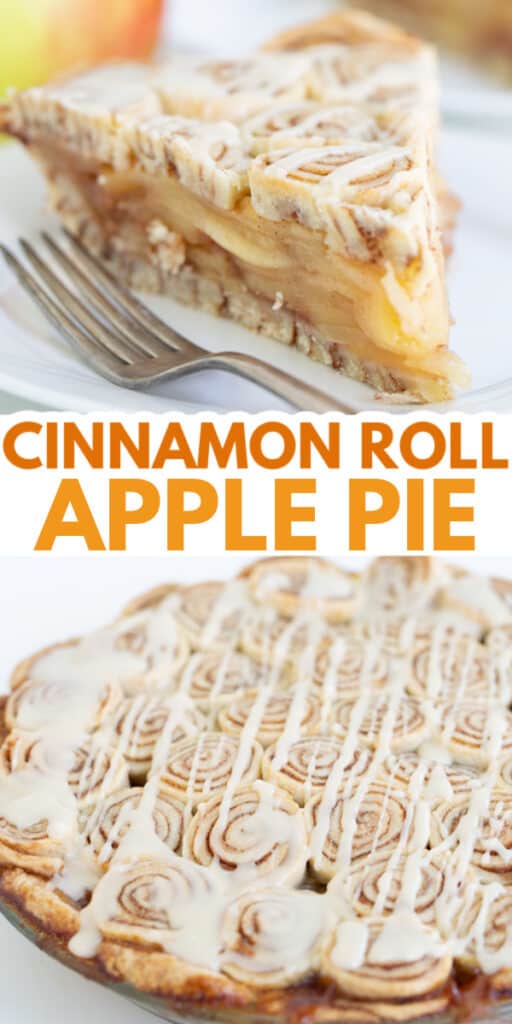 This Cinnamon Roll Apple Pie Recipe is easy to make from scratch with a homemade cinnamon roll pie crust and a sweet homemade apple pie filling. If you want to step your apple pie game up this year, you have to give this cinnamon roll apple pie a try! Check out the rest of my pie recipes.

Everyone loves a good apple pie. This is especially true when fall comes around and apples are in season. A good apple pie is typically full of cinnamon, a traditional, warm spice that really perfects an apple pie.

So how could you add more cinnamon goodness to your pie? Make an apple pie with a cinnamon roll crust of course! That is exactly what we did with this cinnamon roll apple pie recipe and we know that you are going to go crazy for this delicious creation. Take a look at our notes and then get ready to bake an amazing pie!

If you have additional apples to use up, try my Apple Fritter Cake, Caramel Apple Crisp, Peanut Butter Apple Crumble, or this mini walnut apple pies recipe.

Making cinnamon roll apple pie crust is actually very easy. It all starts with a traditional pie crust dough made with flour, salt, sugar and butter. The crust is mixed together until a smooth dough forms and then the dough is rolled out into a large rectangle.

A mix of melted butter, flour, cinnamon, and sugar is spread across the dough. The next step is to roll the dough into a long log, creating a beautiful cinnamon spiral. The cinnamon roll dough log is refrigerated then sliced into coins.

These cinnamon swirl circles are pressed into a pie pan to create a beautiful crust! Not too difficult right?! The few extra steps really make for a delicious and gorgeous crust. If you have questions about the cinnamon roll pie crust, they've probably already been answered in this post.

How to Make Apple Pie with Cinnamon Roll Crust

Once you have made the cinnamon roll pie crust following our recipe, it is time to make the apple pie filling.

To make the apple pie filling, you start by peeling, coring and slicing the apples. They are then tossed with flour, cinnamon, nutmeg and a little bit of brown sugar. We like to microwave the apples quickly after they have been mixed with the spices and sugar.

Heating them slightly will help the apples release some of their natural juices before being added into the pie crust. This will also soften the apples and let you pack them tightly into the cinnamon roll crust, getting even more apples into one pie!

The cinnamon roll apple pie is then ready to go into the oven and bake to golden perfection. Just be warned, your whole house is going to smell incredible as this pie bakes! You will probably need to eat a piece right when it comes out of the oven.

After making many apple pies, we do have a few tips and tricks up our sleeves. Here are our top three tips to help you make a perfect apple pie.

Certain types of apples are better for baking. Apple varieties that are crisp and sweet are typically the best. Honeycrisp, gala, Golden Delicious and Granny Smith are all good options that you can find in most grocery stores.

Try picking a few different kinds of apples rather than baking with just one type. This will give your apple pie a more complex flavor. It will also give your pie a good texture as some apples will bake nice and soft while others remain crisp.

Do I have to use Honeycrisp apples?

While our recipe uses honeycrisp apples, you can swap out your favorite baking apples instead. We love honeycrisp because they are very crisp, sweet and a little bit tart. They hold up well when baked and don’t turn into mush (no one likes a mushy apple pie!). However, if you prefer to make your pie with gala apples or maybe some jonagolds, this recipe for cinnamon roll apple pie will still be fantastic.

If you want to keep your pie around longer, place it in the fridge after wrapping it. The pie will be good for up to a week when stored in the refrigerator. However, the texture of the pie may change and get slightly soggier the longer it sits in the fridge.

How to Freeze a Cinnamon Roll Apple Pie

If you want to make your pie in advance, you can definitely bake it completely and then freeze it for later.

Let the pie cool completely before wrapping it tightly in plastic wrap. Be sure to wrap the entire pie, pie pan and all. Don’t be afraid to use a few layers of plastic wrap to really seal the pie. Place the wrapped pie in the freezer and store up to three months.

When you are ready to enjoy the pie, place it in the fridge for 24 hours to thaw slowly. Then, unwrap the pie, pop it back in the oven and let it bake for another 15 minutes at 350 degrees F. This will re-crisp the pie crust and freshen up the cinnamon roll apple pie. It will taste like it was just baked that day!

How Long Will This Apple Pie Last?

Our cinnamon roll apple pie recipe will keep at room temperature for up to 4 days, in the fridge for up to a week and will last up to a month when wrapped well and stored in the freezer. However, this recipe is so incredibly delicious, we don’t think there is any chance it will stick around this long! It is too good to resist.

Give this cinnamon roll apple pie recipe a try and let us know what you think. We are pretty sure you will never make a basic apple pie again. More cinnamon, more beautiful spiral decorations and fresh apples- you just can’t go wrong! Enjoy.

Special Tools for this Recipe: 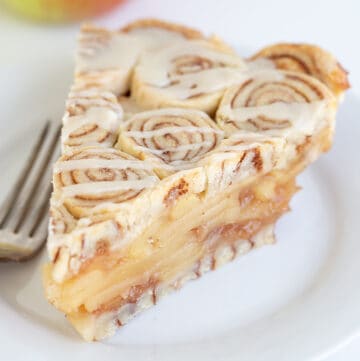