These spider whoopie pies are made of a chocolate cake and filled with a dark red velvet frosting. I added some SweeTARTS® Ropes in the piped frosting for red spider legs and coated the top of each cake with a black sanding sugar to give the spiders a fuzzy look. Finish up this goofy spider by adding candy eyes to it!

This post has been sponsored by SweeTARTS®. All thoughts and opinions are my own. 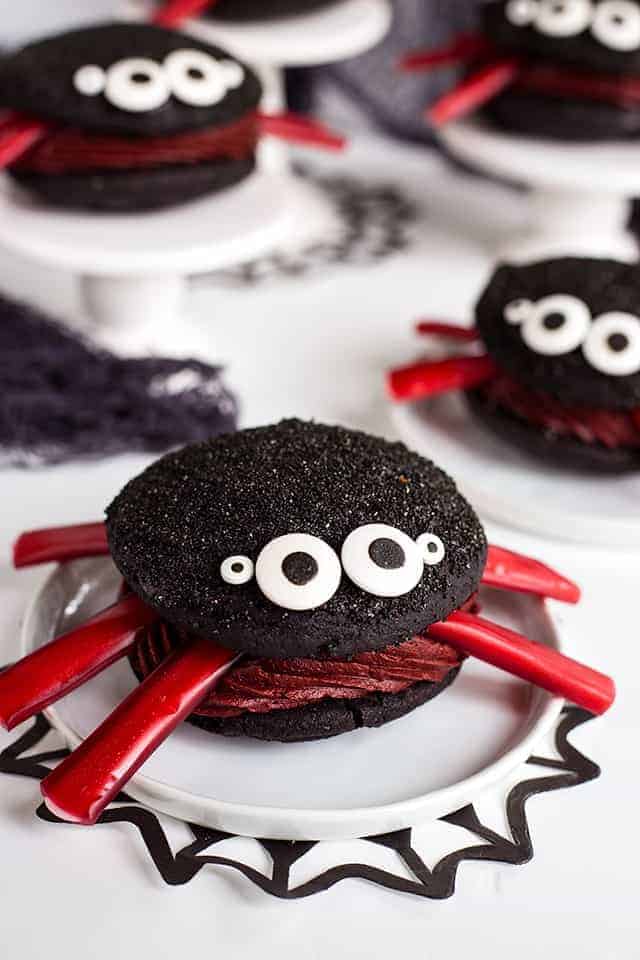 Have you checked out the Halloween candy at Walmart yet?  SweeTARTS® has made SweeTARTS® Ropes in a fun-size pack for Halloween and I'm going crazy with them. Click here to find the SweeTARTS® Ropes at your local Walmart. Then run to Walmart as quickly as possible to grab them and the rest of the goodies you need to make these Halloween treats.

Walmart is my go-to to when I'm grabbing up several things for a recipe. Instead of hopping from store to store hoping it's all at one place, I can get everything in one trip at Walmart. Halloween props, red gel food coloring, SweeTARTS® Ropes, dark cocoa powder, it's there for me! 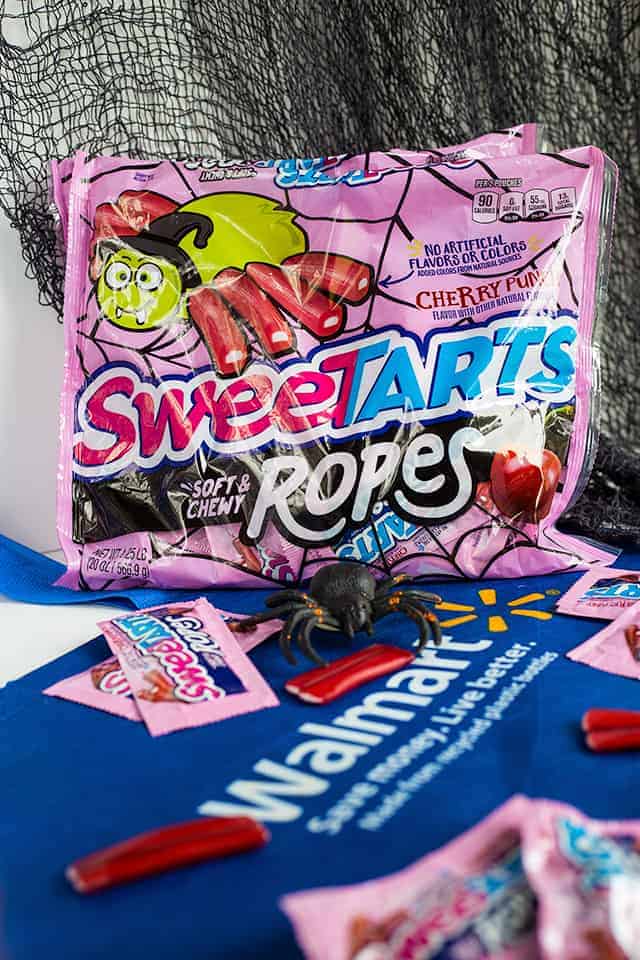 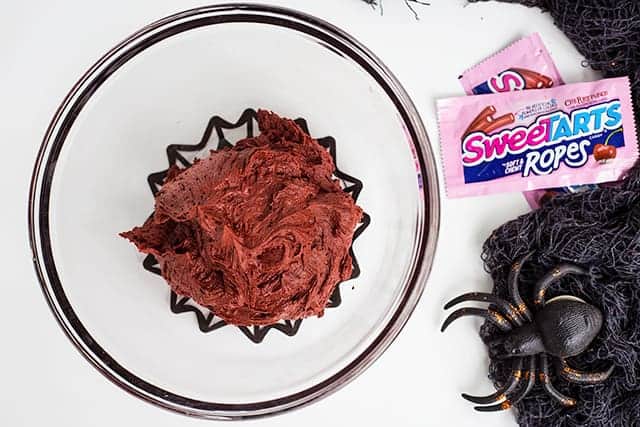 To get started on these adorable spider whoopie pies, you'll need to whip up a batch of red velvet frosting. I didn't bother adding vinegar to the frosting. I bet some people, my husband included, are rejoicing over that. Now that I'm thinking about it, I bet a small amount of vinegar might actually cut through all that powdered sugar that's added. It might actually be a nice addition.

There is a bunch of cocoa powder added to this recipe though. There might even be more than what you would expect for anything red velvet. That means that the red is a deeper color, but I'm okay with that. You can substitute some of the cocoa powder with powdered sugar if you want the color to be more of a bright red color.

How Do You Make Chocolate Whoopie Pies

The chocolate whoopie pie cakes came out perfectly. They were fluffy and didn't spread too much. I wanted them to be as dark as I could get them so I dug out the black cocoa powder that I got at the local Amish store. I know most people don't have a local Amish store, but you can buy it online or use the special dark cocoa powder found at Walmart.

To make the chocolate whoopie pies for my spiders, I first added the flour, cocoa powder, baking soda, and baking powder into a bowl and whisked it. Set that aside and add butter and sugar into a large mixing bowl. Beat until fluffy. Add in the egg, vanilla extract, and buttermilk. Beat until combined and start working in the dry ingredients until a batter is formed.

To make the pies the same size, use a cookie scoop. I went with a 2 tablespoon scoop. It's the best way that I know of to make sure your pies come out perfectly. 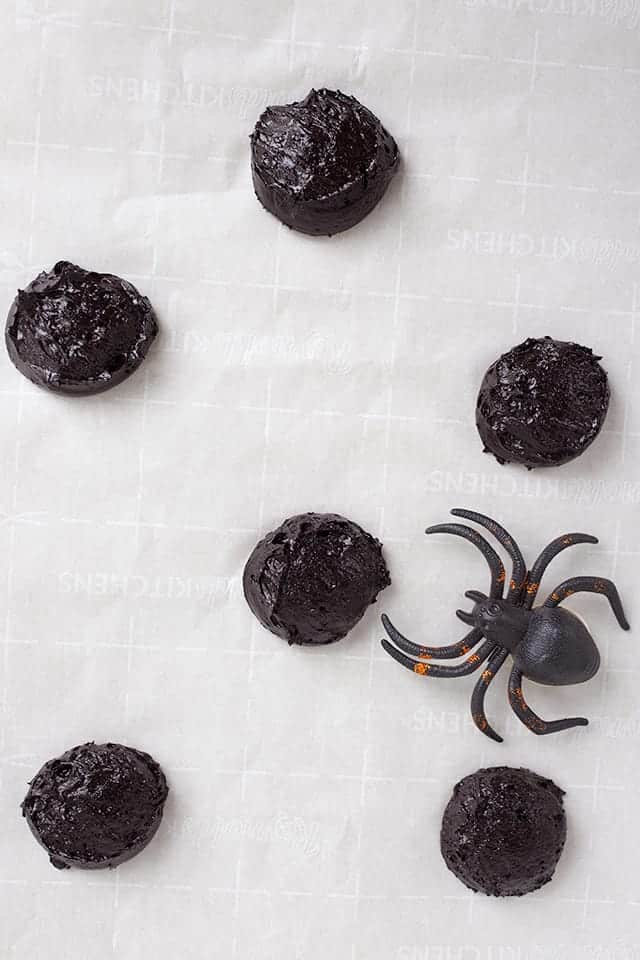 How to make the spider whoopie pie fuzzy

Also, you don't need to do the bottom of the spider. So separate out 9 of the whoopie pie cakes and set them aside to be left plain.

So now that's done, pipe the red velvet frosting on the flat side of the plain whoopie pies. I used a french star tip, but any piping tip will work. Add a generous amount of frosting too.

Get out the SweeTARTS® Ropes that you grabbed from Walmart and add 2 - 4 on either side of the spider. I did most of mine with 2 or 3 legs. I know it should be 4 on each side, but there just wasn't enough room. The hubby and son were quick to let me know that I didn't have enough legs.

To make sure the fuzzy top would stick, I added another dollop of frosting right on top of the SweeTARTS® Ropes. Pop the top on and give it a twist to make sure it's firmly on.

Let's not forget about those goofy adorable eyes! I heated up the leftover black candy melts and added a small amount on the backs of the eyes. Place them on the top and let them dry.

Have you had these SweeTARTS® Soft and Chewy Ropes? They're delightfully sweet and delicately tart. The rope is a bendable licorice filled with chewy SweeTARTS® that pack a fruit-punch and has a mouthwatering maze of texture and taste! Candy lovers will go crazy. Click here to find them at Walmart. I love that they now come in the perfect size to hand out for Halloween and create fun Halloween desserts with! 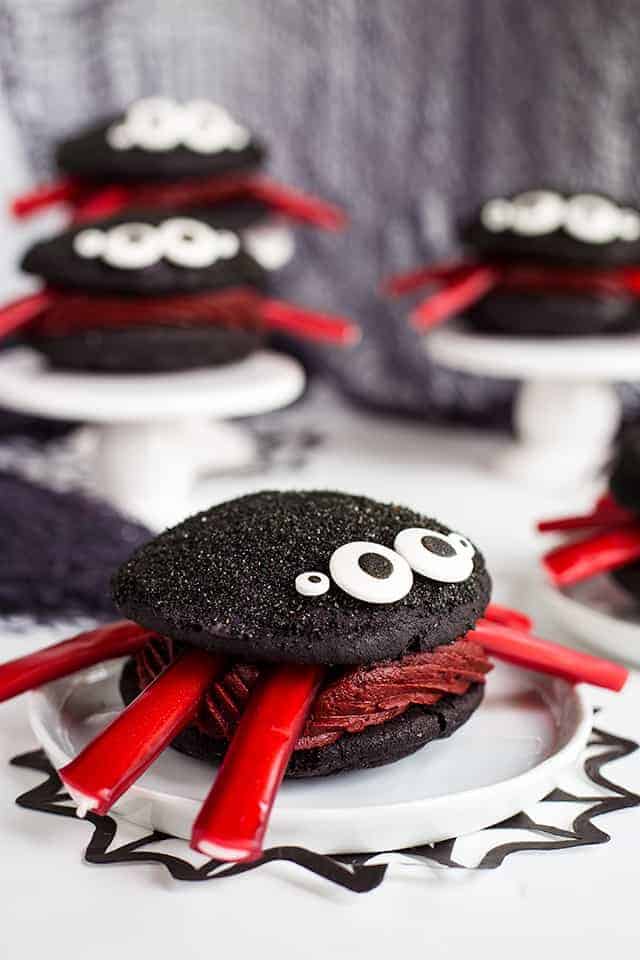 What can I use instead of buttermilk? Add 1 tablespoon of vinegar to a 1 cup measuring cup. Fill the rest with milk and let it stand for 5 to 10 minutes. 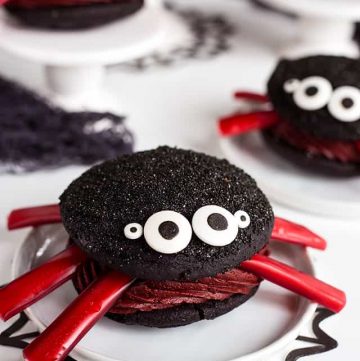