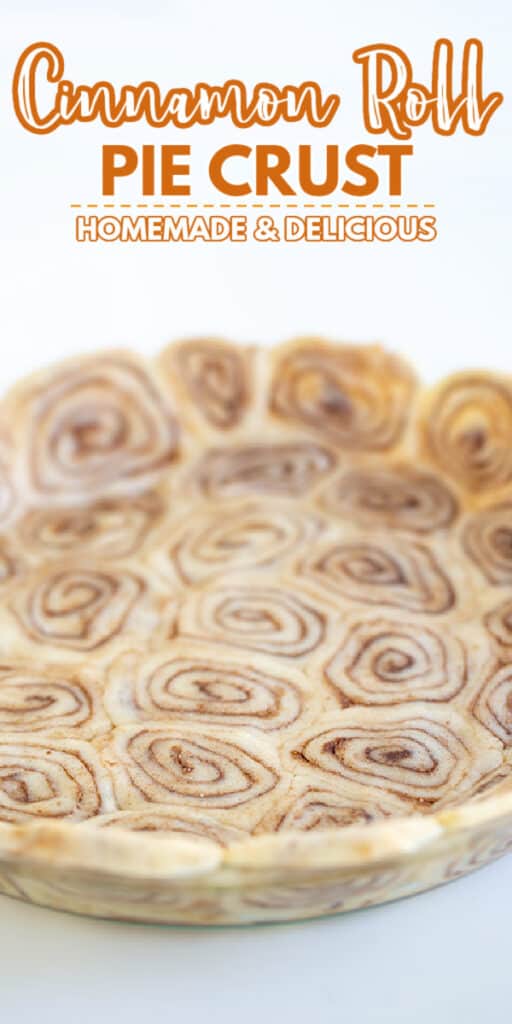 This Cinnamon Roll Pie Crust is made with a classic pie crust that's been coated with cinnamon and sugar and rolled up like a cinnamon roll. Slice and press into a pie plate to create some delicious and beautiful swirled pie crusts! Take a look at the pies while you're here!

Making a picture-perfect pie is on the top of many people’s lists this fall. It is baking season, after all!

One thing that is sure to make your pie crust look and taste amazing is this cinnamon roll crust recipe. Perfect spirals of cinnamon goodness makes any pie just so much better.

It is especially a great crust for all your fall baking needs since cinnamon is a key flavor of the season. Our cinnamon roll pie crust recipe is perfect for using with pumpkin pie, pecan pie and definitely to make a cinnamon roll apple pie.

Cinnamon roll crust doesn’t require too many unique ingredients. In fact, you probably have a lot of the ingredients for this pie crust at home already. Here is a quick look at what you will need:

That’s it! It is surprising how so few ingredients can come together to make something so delicious! However, with these simple ingredients, you can make your basic fall pie into something spectacular.

To start, the pie crust ingredients are blended in a food processor to form a smooth dough. I recommend using a food processor but you can also use a stand mixer fitted with a paddle attachment or even just make the crust with your hands.

The key is the order you blend the ingredients together. Make sure that the butter and flour mix form small crumbles first before adding the water. This is important to getting your crust to be flakey rather than tough.

The crust filling is mixed together in a separate bowl, blending the flour, cinnamon, and sugar together well. This tasty mix is where the crust gets all that great cinnamon roll flavor.

The dough is then rolled into a large rectangle.

Then you'll brush the melted butter over the top of the entire crust and sprinkle the filling over the crust evenly.

Roll the dough up like a jelly roll, rolling the dough from the bottom to the top and sealing in the filling. The result will be a long log that has a beautiful spiral on each end.

The slices of dough are pressed into your pie pan to create a gorgeous cinnamon roll crust. Press the slices together gently to seal the crust and make it into one, uniform dough.

Repeat with the second half of the pie dough to create a cinnamon roll top.

Can You Blind Bake This Pie Crust?

Many recipes may ask you to blind bake your pie crust which means baking the crust a little bit before filling it with your pie filling. This can help the crust cook more evenly and helps many crusts to have a flakier texture.

However, we do not recommend that you blind bake this cinnamon roll pie crust recipe. When blind baked, the crust has a tendency to shrink and pull away from the pan. This causes gaps between the slices of cinnamon roll crust and in the spirals even when they've been firmly pressed together.

Rather than blind bake this cinnamon roll crust, simply fill it with your pie filling and bake the whole pie at once, crust and filling together. The moisture from the pie filling will prevent the crust from shrinking or drying out. The crust will still be fantastic, buttery and perfectly cooked without the blind baking!

Can This Pie Crust Be Made Ahead of Time

Recipes that you can make in advance are always the best. It is so nice to prep your pie when you have time and bake it whenever you are ready! This pie crust can definitely be made ahead of time. There are a few ways in which you can prepare this crust in advance.

First, you can make the pie crust and filling, roll it up into the long log then wrap the log and freeze it whole. When you are ready to make the pie, take the log out of the freezer and let it thaw slightly at room temperature. Cut the log into slices and then continue with the recipe, pressing the slices into the pie pan as directed.

Another way in which you can prepare this pie crust ahead of time is to make the whole crust, press the cinnamon roll slices into the pan and then wrap the pie crust and pie tin together. Place the prepared crust in the freezer for up to three months. When you are ready to use the crust, take it out of the freezer and thaw before filling and baking. The cinnamon roll pie crust will be delicious no matter which freezing method you choose!

What Pie Fillings Would Be Best in This Crust?

We know that cinnamon roll pie crust sounds fantastic. But what kind of fillings would be good in a cinnamon roll crust? There are actually quite a few pies which would taste great with this slightly spicy, sweet crust. Here are our favorites:

A little trick is to see what pie recipes already use cinnamon. Those recipes will be great with extra cinnamon and, therefore, this cinnamon roll pie crust recipe! Almost any kind of fruit pie will be great or anything that has that “fall season” flavor! 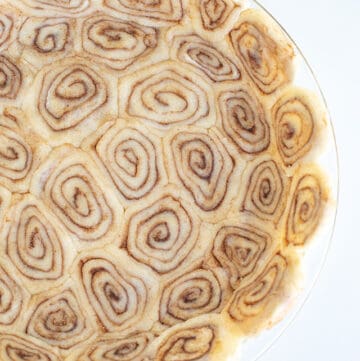