This monkey bread recipe with frozen bread dough has pockets of delicious gooey brown sugar and butterscotch. Each piece of bread is rolled in cinnamon sugar and piled on top of a buttery brown sugar mixture. It's baked to perfection and flipped out onto a serving plate.

This post is sponsored in conjunction with #EasterBrunchWeek #ad. I received products for recipe development and the sponsors supplied fun prizes you can win. As always, all opinions are honest and my own. 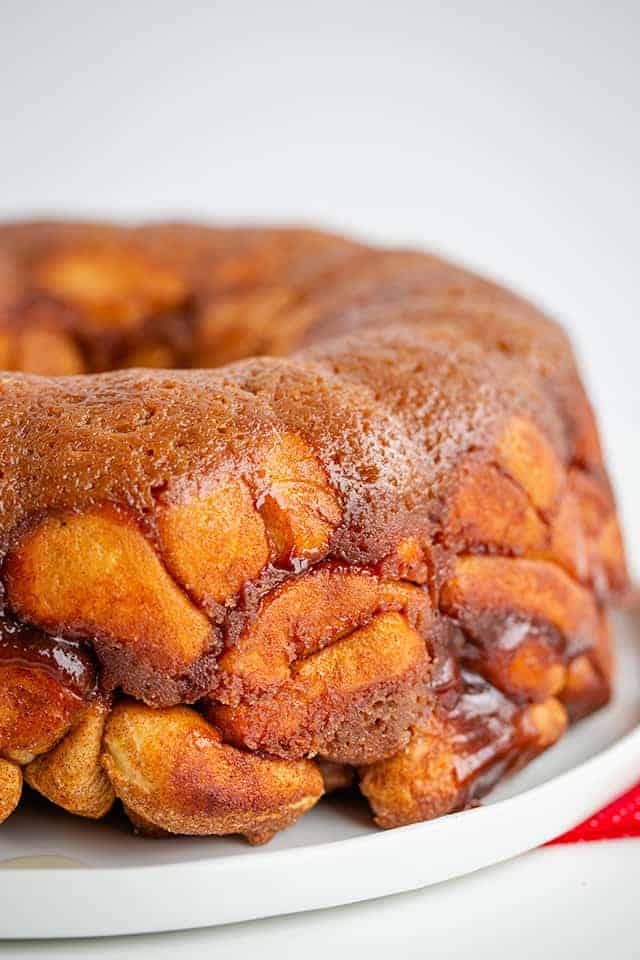 If you've never had Monkey Bread with butterscotch pudding, you need to! It makes this monkey bread all the more amazing with pockets of gooey wonderful all throughout the bread. It adds a nice flavor too!

Monkey bread was probably my very favorite childhood dessert. Let's be honest, it's pretty high up on my favorites as an adult too. I've made canned biscuit monkey bread and crockpot monkey bread, now I'm whipping up this easy monkey bread recipe with frozen bread dough.

What I like most about using frozen bread dough is that I don't have to pop those cans of biscuits. I am literally scared to death to pop them. I suck it up and do it, but like that I can also avoid it. 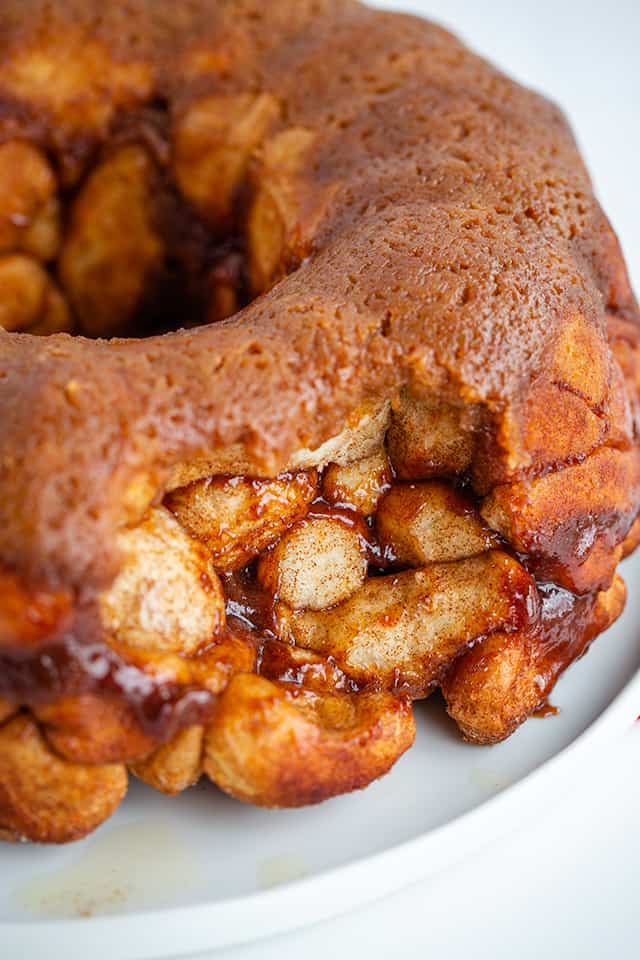 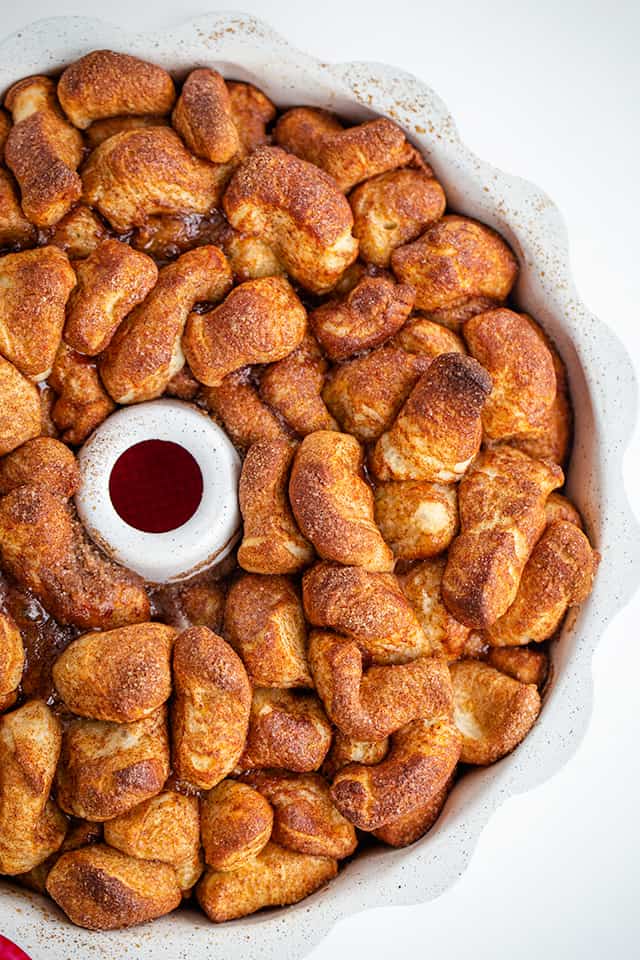 How do you make Monkey Bread?

The very thing you want to do to make this monkey bread recipe is thaw that frozen bread dough. I let it sit out for about 2 hours at room temperature so it's still cold, but not frozen. You can also let it thaw in the fridge overnight.

I let it sit out at room temperature. To do this, I greased a baking pan, laid two loaves of bread on it, sprayed the top with nonstick cooking grease, and loosely covered the bread with plastic wrap. Depending on how warm or cold your kitchen is, it could take a little longer than 2 hours or a little less. Just check on it occasionally.

In a shallow bowl, add in the ½ cup of remaining brown sugar/butterscotch mixture, granulated sugar, and cinnamon. Stir to combine.

After the bread has thawed, start cutting it in ½-inch strips. Each strip should be cut into 6 to 7 pieces. Throw the pieces into the shallow bowl and them around until they're coated with the sugar mixture. 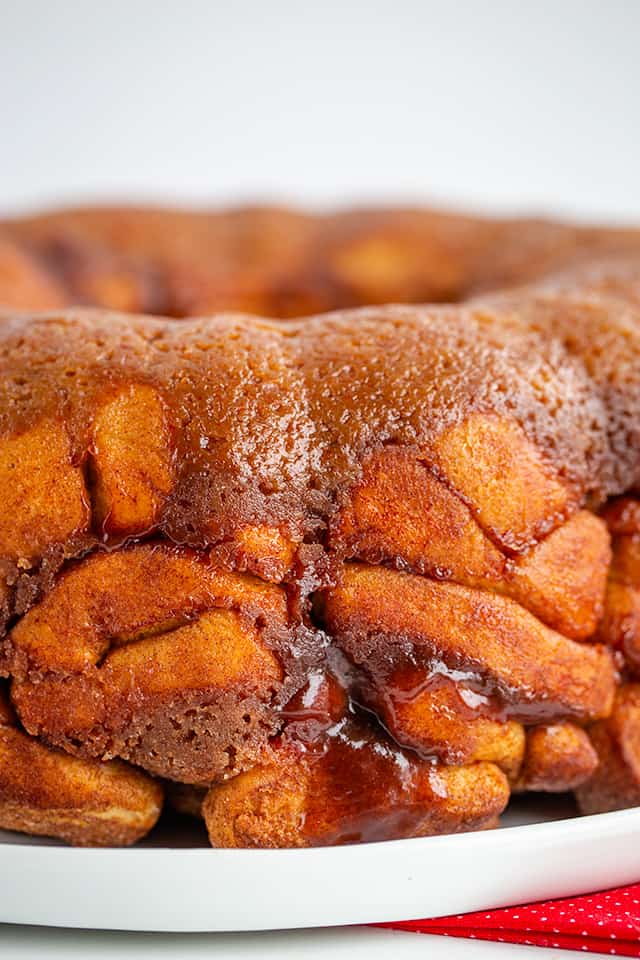 How to tell when monkey bread is done

I like to pull a few pieces of the bread up from the center of the bundt to make it pulls apart and looks baked all the way. You can do this 2 pieces deep and that should give you a pretty good idea. 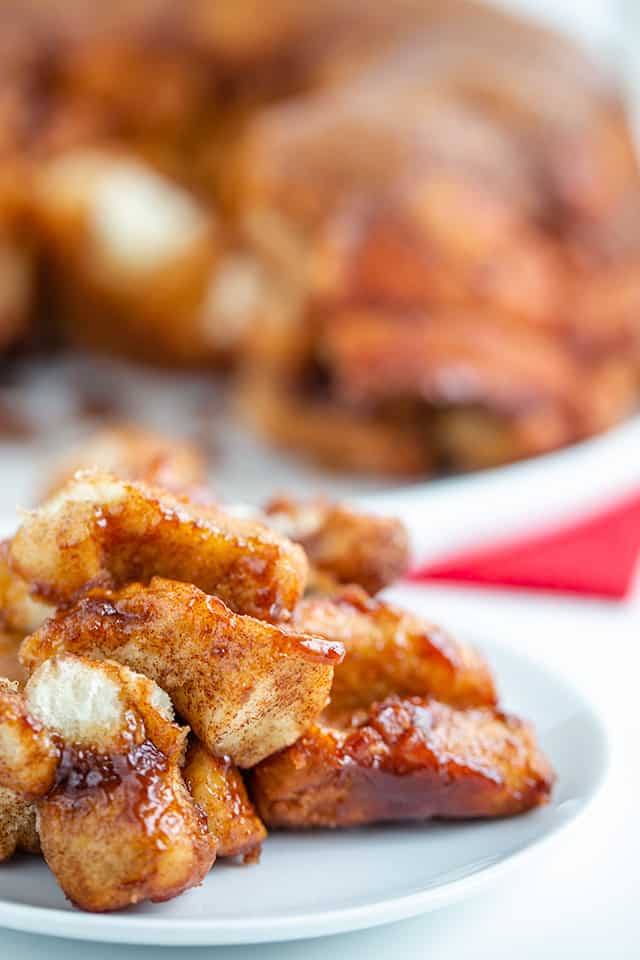 What pan do you use for monkey bread?

Is monkey bread good the next day?

Can monkey bread be made ahead of time?

Yes! Follow the recipe all the way through until you come to the baking part. Stop at this point, cover with plastic wrap, and immediately place into the fridge. Don't bake it directly out of the fridge. I would let the pan come back up to room temperature before baking. That will take maybe 30 minutes.

How long will monkey bread last?

Monkey bread can last about 4 days before it gets hard and unpleasant.

Official Rules and Conditions for the #EasterBrunchWeek Giveaway: One grand prize winner winner will be receive a prize package including items from Eggland's Best, Grosche, Hamilton Beach, Rhodes Bread, Silpat, Stonyfield and Wewalka. Open to US residents 18+. One (1) winner will be chosen. Prize must be claimed within 48 hours of announcement or a new winner will be drawn. Prize will be delivered electronically. All entries will be verified. This giveaway is in no way associated with Facebook, Pinterest, Twitter, Instagram, Rafflecopter, or any other entity unless otherwise specified. Giveaway ends 4/20/2019. Enter using the widget below. Comment each day for even more chances to win! 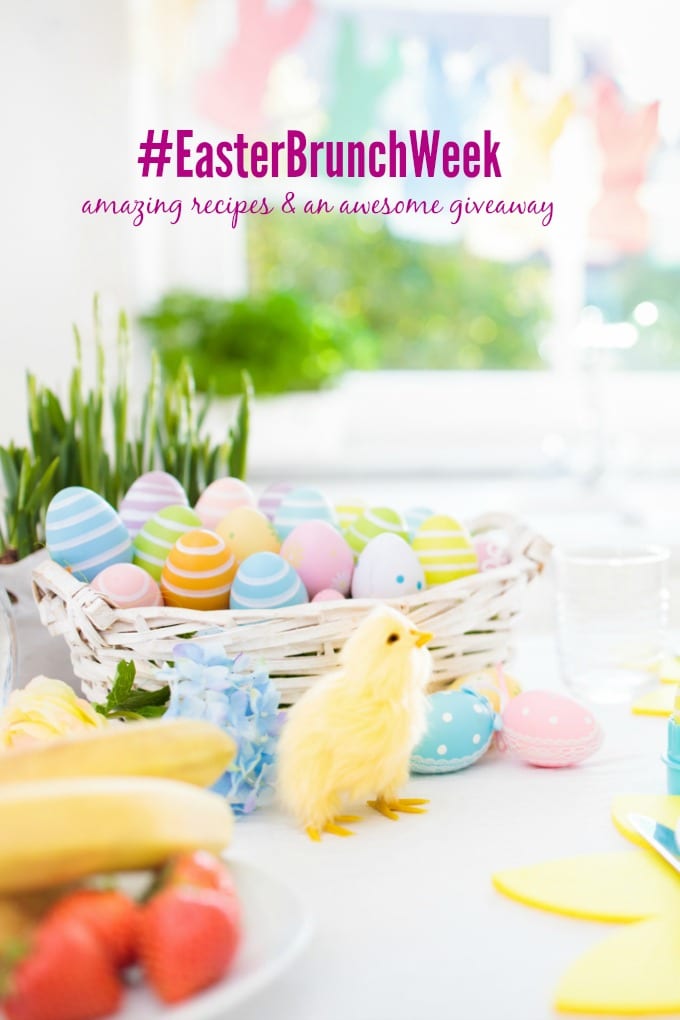