This Quick and Easy Monkey Bread is made with biscuits that have been chopped into quarters and rolled in cinnamon and sugar. It’s baked to perfection in a bundt pan and inverted on a plate so the warm gooey brown sugar and butter coat the top and sides of the monkey bread. This quick monkey bread tastes great served warm or at room temperature.

Monkey bread is easy to make and so delicious. This cinnamon sugar monkey bread will quickly become one of your go-to dessert recipes. It's fun to eat and will save on dirty dishes!

Butter – I recommend salted butter because it breaks up the sweetness of the brown sugar slightly, but you can use unsalted if you prefer and just add in your own salt when heating up the brown sugar and butter.

I would suggest starting with ⅛ to ¼ teaspoon of salt if you’re adding it separately.

Sugar – This recipe does call for two types of sugar. The light brown sugar will become the topping for this quick monkey bread and the granulated sugar is mixed with cinnamon and coats each piece of biscuit to maximize that flavor.

You can substitute the light brown sugar for dark brown sugar if you would like. I haven’t tried it, but I know it will perfectly and will give more of a molasses flavor to the recipe.

Canned Biscuits – I always use the generic Walmart brand of the 4 pack of biscuits in the tubes, but I know Pillsbury also carries them as well.

Cinnamon – The ground cinnamon is mixed with granulated sugar to make a delicious cinnamon-sugar coating for the pieces of biscuit. Did I mention this easy monkey bread recipe tastes a lot like a gooey cinnamon roll? YUM!

How to make Monkey Bread with Biscuit Dough

If you’re interested in making monkey bread from scratch rather than using store-bought biscuit dough, I have just the recipe for you. My Homemade Monkey Bread gives you all of the details to make your own dough.

Step One: For this monkey bread recipe using store-bought biscuit dough, start by greasing the bundt pan and preheating the oven to 350 degrees F.

Step Two: Add the granulated sugar and cinnamon to a small bowl and stir until the cinnamon is evenly distributed.

Step Three: Open one can of biscuits at a time and cut each biscuit into 4 pieces. It’s quicker to cut a stack of 2 to 4 biscuits into quarters and then pull them apart.

Step Four: Toss the pieces in the cinnamon-sugar mixture and stir until thoroughly coated.

Step Five: Add the quarters of biscuit on top of the brown sugar and butter, spreading them out evenly around the bundt pan.

Place the bundt pan into the preheated oven and bake.

Does Monkey Bread Have to be Made in a Bundt Pan?

If you’re comfortable adjusting the bake times and knowing what to look for in the bread being done, you can definitely use a muffin pan, loaf pan, or a 9x13 pan.

Muffin Pan - You might have to do some adjusting to how many biscuits you are using or doubling the batch of brown sugar and butter mixture. The bake time will be quite a bit less.

Loaf Pan – This recipe will probably make two regular-sized 9x5 loaf pans of monkey bread. You can either split the brown sugar and butter mixture or make two batches.

9x13 Pan – You can double the brown sugar and butter for this or leave it as is. Make sure to check the biscuits in the center of the pan that they aren’t doughy underneath before taking it out of the oven.

What kind of biscuits to use for monkey bread?

How long do you bake monkey bread?

This recipe typically takes 42 minutes to bake in the 9 ½ inch bundt pan. If you change the size of the pan, the time can and probably will change.

If the bottom of the pieces that haven’t been exposed is still doughy, the bread needs to bake longer. If it’s fully baked and no stretchy dough appears, it’s ready.

Yes! It’s a MUST to try monkey bread warm, but it's delicious at room temperature as well. 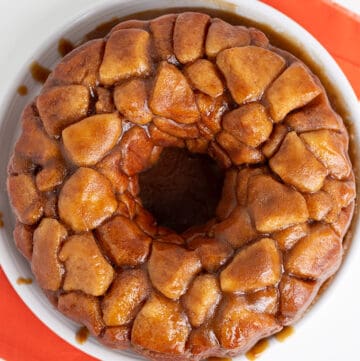 This post was originally published August 8, 2013, but updated in September 2021 with additional information.