This carrot cake with caramel buttercream is the perfect Easter dessert! This carrot cake recipe is so moist and tender. It's made with vegetable oil instead of butter. It's spiced up with some cinnamon and nutmeg too. The frosting is a swiss meringue buttercream with a caramel sauce added to it. Plus, sandwiched between each cake layer is even more caramel! 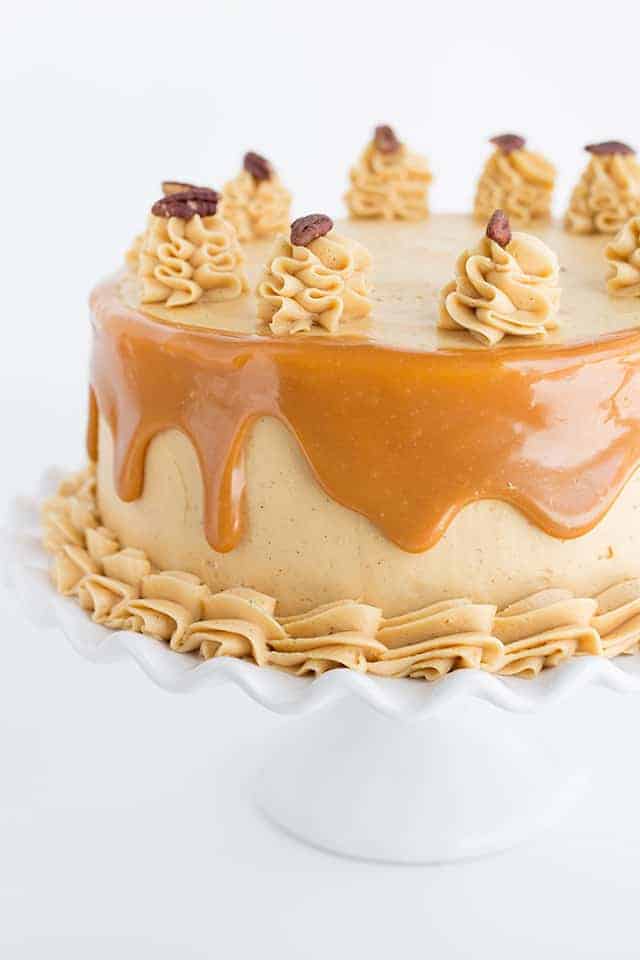 This easy carrot cake recipe would taste amazing with home-grown carrots. Fresh carrots pulled from the garden are always the sweetest. Unfortunately, there's still snow on the ground here in New York and I had to buy mine from the store.

I couldn't wait until this summer to make this recipe. I needed it for Easter! 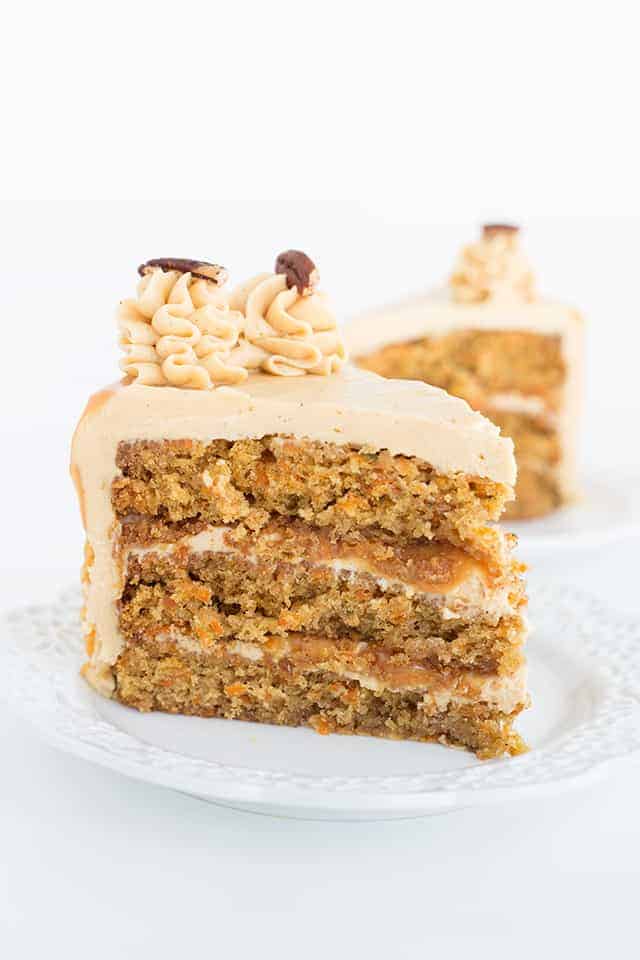 Though you could wait until Fall to make this recipe too. It has the warm flavors of cinnamon and nutmeg. The beautiful golden color of the caramel. Can we just skip spring and summer and jump into fall? I'm totally joking, sort of. It's my favorite season and this cake completely reminds me of it.

The caramel was an awesome compliment to the carrot cake. Honestly, I think caramel goes perfectly with basically everything, especially a spoon. 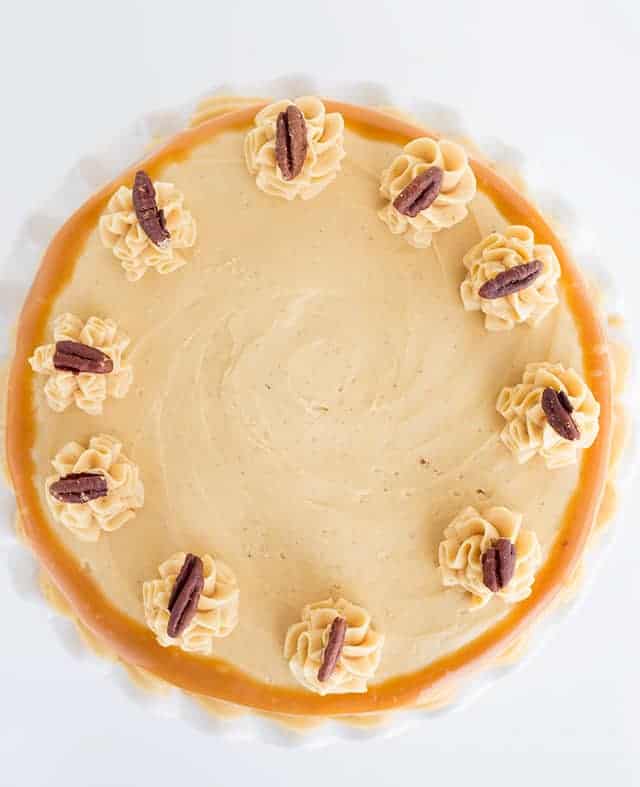 I'll be honest though. I did not make the caramel. I grabbed some caramel sauce out of the ice cream aisle for the caramel buttercream and the caramel for the filling and the drip came from those individually wrapped caramel squares.

A little shortcut is well-deserved after whipping up a batch of swiss meringue buttercream. It's not a crazy amount of work, but it has several more steps than American buttercream has. 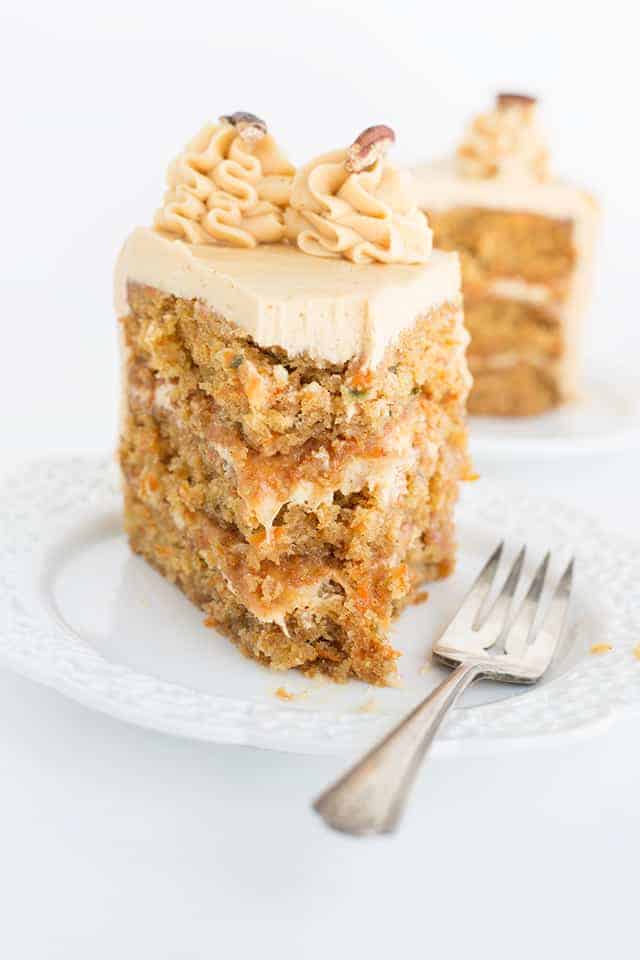 I also added some toasted pecans for garnish. Pecans are my very favorite nut. The husband isn't keen on them, so I didn't add them into the actual cake. One of my favorite parts of eating the cake was the pieces of roasted pecans on the top of the cake with the drizzle of caramel. Holy smokes. This could be my new birthday cake. I might have to retire the chocolate cake with peanut butter frosting. It's a close call. 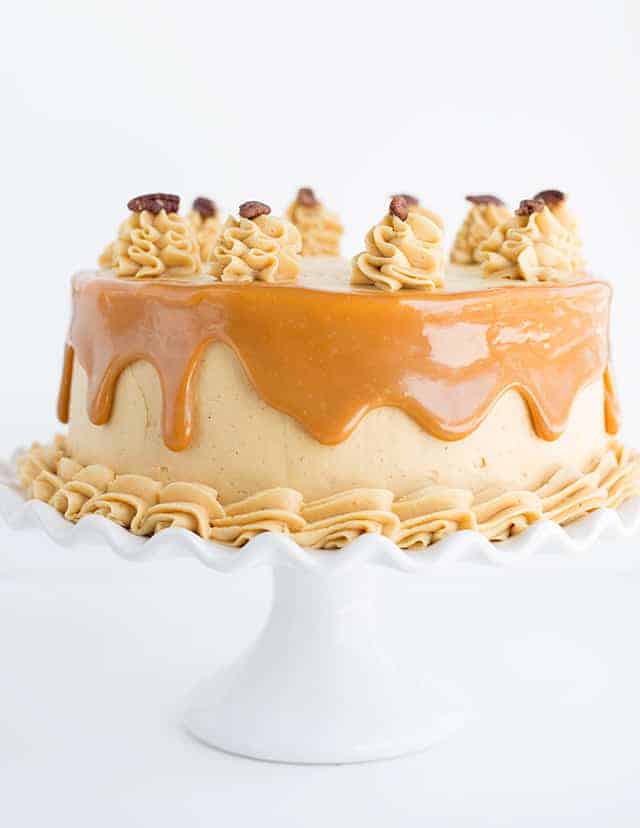 How to make carrot cake:

Author: Miranda Couse
This carrot cake recipe is so moist and tender. It's made with vegetable oil instead of butter. It's spiced up with some cinnamon and nutmeg too. The frosting is a swiss meringue buttercream with a caramel sauce added to it. Plus, sandwiched between each cake layer is even more caramel!
4.58 from 14 votes
Print Recipe Pin Recipe Rate this Recipe
Prep Time 45 mins
Cook Time 55 mins
Total Time 1 hr 40 mins
Course Dessert
Cuisine American
Prevent your screen from going dark
Servings 8 inch cake
Calories 1511 kcal

Place the cake back in the fridge to prevent the caramel from continuing to drip after it comes back to room temperature.