Apple Cinnamon Rolls are made with a sweet cinnamon roll dough and packed full of an apple pie filling made with tangy Granny Smith Apples that have been caramelized. They're topped with cream cheese icing and served up for the perfect fall breakfast and dessert!

Everyone loves a fresh, warm cinnamon roll but there is actually something even better- apple cinnamon rolls! Imagine a cinnamon roll filled with apple pie filling...sounds amazing, right?

Let's show you how to make this perfect, irresistible fall-themed breakfast so that you can enjoy apple cinnamon rolls today!

There are a few different parts to our apple cinnamon roll recipe; the dough, the apple pie filling, the cinnamon filling, and the frosting.

Since the recipe is a little more advanced, there are also quite a few ingredients that you will need in order to make these rolls. However, we will walk you through every step of the process to make it as easy as possible!

Here are the ingredients we use:

It takes a lot to make these apple cinnamon rolls from scratch but they are definitely worth the effort. Fresh ingredients make for the best breakfasts!

How to Make Apple Cinnamon Rolls

Make the Homemade Apple Pie Filling. First, the crisp granny smith apples are peeled, cored, and diced. Then cooked in a small saucepan with the butter, cinnamon, cornstarch, and brown sugar. This apple pie filling is set aside to cool. Feel free to give it a taste to check the flavor but try not to eat it all!

Make the Cinnamon Roll Dough. The butter and milk are warmed and then mixed with the yeast. Sugar, eggs, salt, and oil are blended into the milk mix and finally the flour is mixed in as well, creating a smooth dough. The dough then needs to rise and puff up (this process is called proofing) before it is ready to use.

Work on the Cinnamon Filling. While you wait for the dough to be ready, you can prepare the cinnamon filling by mixing the butter, cinnamon and sugar together.

Assemble the Apple Cinnamon Rolls. Roll out the soft dough into a large rectangle and spread the cinnamon filling along with the cooled apple pie filling across the dough. Roll the dough up lengthwise into a long log and then cut the log into slices. The apple cinnamon rolls are ready to bake!

Make Cream Cheese Icing. After the rolls have come out of the oven, spread the cream cheese icing over the top while they are still warm so that the icing melts into the rolls- delicious!

We strongly recommend eating these apple cinnamon rolls while they are still nice and warm- you will be happy that you did!

How to Store Cinnamon Rolls

While you might be able to eat an entire batch of apple cinnamon rolls right when the come out of the oven, you may want to save a few for later.

Store your baked apple cinnamon roll in an airtight container or tightly wrapped in plastic wrap. Keep them at room temperature for 3-4 days in order to preserve that soft, chewy texture.

You can also opt to store them in the fridge for up to a week or in the freezer for up to three months! The key is to wrap them as tightly as possible and protect them from the air which can cause the rolls to dry out.

How to Freeze Cinnamon Rolls

Interested in freezing our cinnamon rolls? It is very easy! There are two ways to store your cinnamon rolls in the freezer- baked and unbaked. Both methods work well and will give you amazing, homemade apple pie cinnamon rolls. Choose whichever method works best for you!

How to Freeze Baked Cinnamon Rolls

Once your cinnamon rolls have baked, let them cool completely. Then, wrap the cinnamon rolls tightly in plastic wrap. It is best to keep them as a full sheet but you can also wrap them individually.

Once the rolls are wrapped in plastic wrap, place them in a freezer bag and into your freezer. The freezer bag will offer an extra layer of protection and help keep your cinnamon rolls soft and moist.

When you are ready to enjoy one of the baked cinnamon rolls, take it out of the freezer and let it thaw at room temperature. You can also microwave them for about 30 seconds to one minute in order to thaw quickly.

How to Freeze Cinnamon Roll Dough

If you want to freeze the cinnamon roll dough to bake later on, you definitely can. Make the cinnamon rolls up to the step where you roll the filled dough into a long log. Cut the log in half and then wrap the two logs tightly in plastic wrap. Place both logs inside a zippered freezer bag and freeze for up to three months.

When you are ready to cook the cinnamon rolls, let the dough thaw slightly and then cut the log into one-inch pieces. Place the frozen cinnamon roll slices in your baking pan and let them thaw completely.

Bake as directed in the recipe and you will have perfect, fresh cinnamon rolls! Freezing the dough is a great way to ensure you have an awesome breakfast ready to go, anytime!

Here are a few questions you may have about making our apple cinnamon rolls. Hopefully the answers will help you create the perfect fall breakfast! If you have any other questions, feel free to ask and we will be sure to respond!

Can I use canned apple pie filling?

Chop the apples in the apple pie filling in order to make smaller pieces. The smaller, diced apples spread better inside the cinnamon rolls.

Can This be Overnight Apple Cinnamon Rolls?

You can use this recipe to be overnight apple cinnamon rolls. Once the cinnamon rolls are cut and in your baking pan, wrap the pan in plastic wrap and place it in the fridge to store overnight.

In the morning, take the rolls out of the fridge, preheat your oven and then bake as directed! Your cinnamon rolls will cook perfectly and give you a faster, homemade breakfast. Delicious! 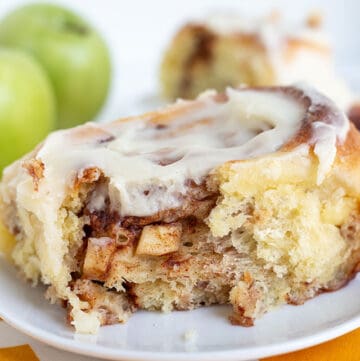