These Air Fryer S'mores are so quick and easy to make and perfect year-round! The marshmallows are golden brown every time and the centers always have the perfect squish. No campfire needed for these Indoor S'mores!

You only need a few ingredients to create these indoor S'mores.

How to make s'mores in the air fryer

Making s'mores in the air fryer takes no time at all!

Here are a few ideas to get you started. Let me know if you try them!

Swap out the large square marshmallows for regular marshmallows or even the giant marshmallows. I would recommend cutting those giant ones in half though.

A few variations that come to mind would be adding a Reese's peanut butter cup instead of a chocolate bar.

Spreading a layer of peanut butter on the top graham cracker and keep the piece of milk chocolate.

Adding a couple of slices of banana after you've toasted the marshmallow.

Spreading a layer of Nutella on the top graham cracker and kepe the piece of chocolate, but maybe use a Lindt hazelnut chocolate bar isntead.

How to store Air Fryer S'mores

S'mores don't store very well and with using the air fryer, there's not really a need to store them. If you have 5 minutes, you have time to make them fresh and also one at a time!

What kind of air fryer do you use?

Like many others, I use the COSORI XL 5.8 Quart 1700-Watt Air fryer. I love the big square space that it provides and the digital screen. The shake button works great for things like fries and wings.

I used to have the GoWise USA 3.7 Quart Air Fryer that I loved. I called it the egg because it was tall and sort of egg shaped. It didn't have nearly the room, but would work nice for 1 to 2 s'mores.

Can I cook s'mores in the oven if I don't have an air fryer?

Yes! Preheat the oven to 360 degrees F and line a baking sheet with foil or parchment paper if it's not nonstick. Bake the s'mores as you would in the air fryer, if it's not as golden brown, I would let it go another 1 to 2 minutes while keeping a close eye on the marshmallow so it doesn't burn.

Can I use different marshmallows?

Yes! If they're smaller than the square marshmallows, you can keep them whole or cut them in half and press the two sticky sides down onto the marshmallow so they stay stuck and don't fly off while in the air fryer. 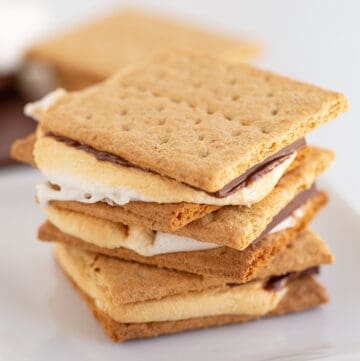