The first time I made this key lime pie cheesecake, I baked it and let it cool in the oven like I normally do. The next day I was anxious to try it out to only figure out that I had never put it in the fridge. I wanted to eat it so bad but didn't dare. I wasn't up for a case of food poisoning.

I had even told my friend that I would bring her some of this key lime cheesecake recipe before realizing that it had never made it to the fridge. She was game for still trying it, but I wouldn't take it down to her. Sometimes you just need to watch out for your friends.

Can I just say that I've probably eaten worse things at my grandmother's house though? She wasn't big on expiration dates or putting the mayonnaise away. Is that a grandma thing?

Fresh limes not necessary for this key lime cheesecake

Did I just hear a gasp? You're not going to believe this, but I used key lime juice out of the bottle and I recommend you do the same thing. Seriously. I used Nellie & Joe's Key West Lime Juice for some time now and it never fails me. I can always find it either on Amazon or at my local Walmart.

Key limes aren't always that easy to come by at least not in upstate New York. I've used them but they're so tiny and hard to find that I prefer the juice out of the bottle. I can't say the same about lemons though.

I did use a regular lie to slice up and zest onto the cheesecake. You may want to grab 2 if you want to garnish your cheesecake the same way I did.

What is key lime cheesecake?

Instead of using regular lime juice, key lime juice was used. So what's the difference? Key limes tend to be more aromatic and have more of a floral juice. Key limes are also much smaller and the peels tend to have a more leathery feel to them. Lastly, you'll find key limes in the grocery store only when they're in season. That means you're not going to find them in the middle of winter.

You will, however, find "regular" or Persian limes pretty much year around.

Can I substitute the key lime juice with regular lime juice? The answer is if you must.

The key lime cheesecake may be more tart with regular lime juice in it, so think about possibly adding more sugar. I haven't tested it myself though, so I can't tell you exact amounts or even if you will need it.

Can you freeze Key Lime Cheesecake?

You can freeze any cheesecake. You'll need to remove it from the pan unless you've placed a piece of parchment paper under the crust and greased the sides of the pan to ensure it will easily pop out of the pan once it's been frozen. If you removed it from the baking pan, place it on a parchment-lined baking sheet and pop it into the freezer until it's firm. Gently push on the cheesecake to make sure it's frozen pretty solid.

Once it's frozen, wrap it in heavy-duty aluminum foil and place it in a freezer bag. I would say the maximum freeze time is 2 months. To thaw it, place it in the fridge overnight.

How to make Key Lime Cheesecake: 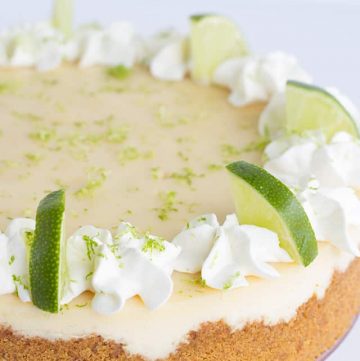 If the limes are damp, dry them off before adding them to the whipped cream.