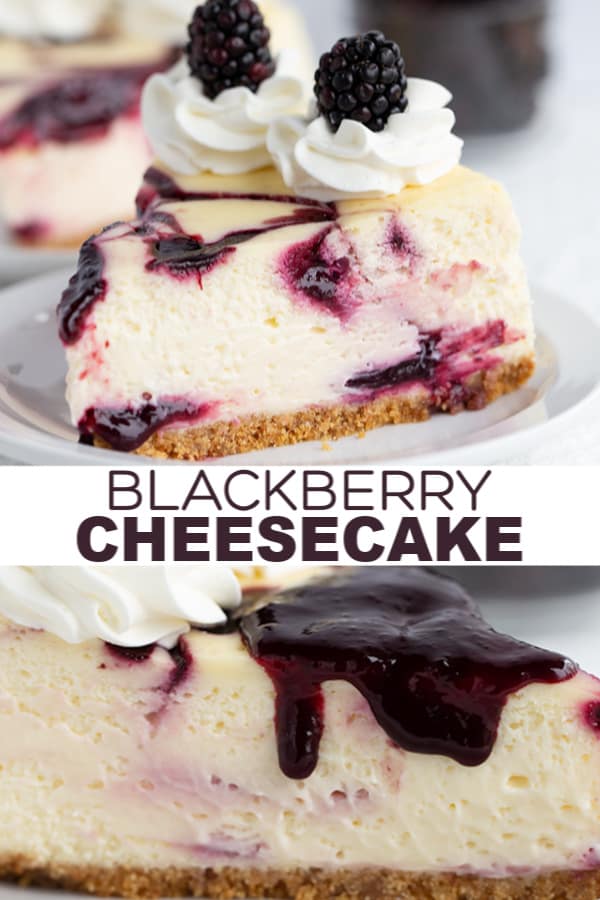 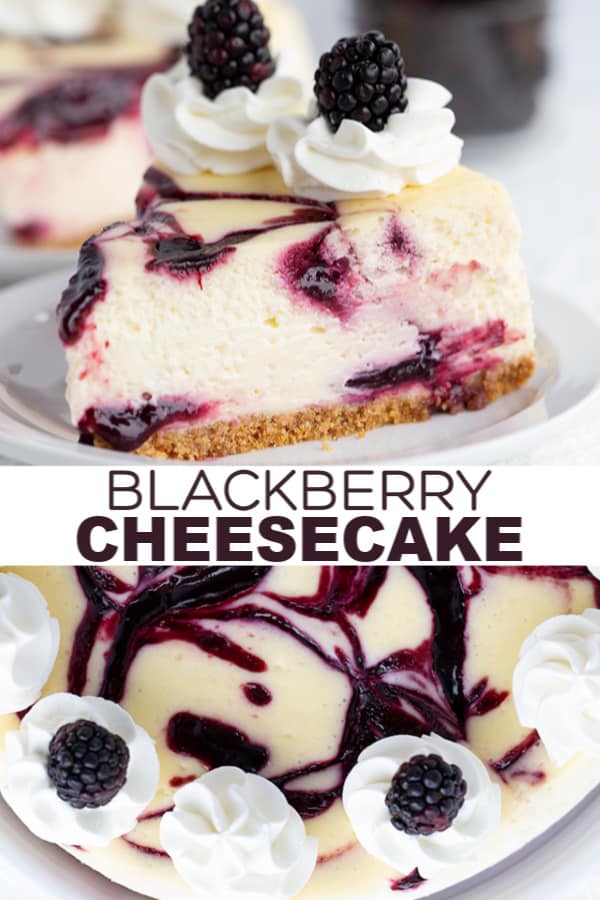 Blackberry cheesecake is creamy vanilla cheesecake with a hint of lemon in it. It has swirls of fresh blackberry sauce and is baked on a golden oreo cookie crust. This baked cheesecake recipe makes the perfect summer dessert when blackberries are at their peak. Check out the rest of my cheesecake recipes too!

Get this cheesecake recipe and 24 others in an ebook for only $6.99

What can I say? It's one of my favorite berries. I wait all summer long to go pick fresh blackberries. I used them to make a swirled blackberry cheesecake with a golden Oreo cookie crust.

So, after creating the blackberry cheesecake recipe, this is what I've decided. Cheesecake + Blackberries = Miranda's slice of heaven. I think the golden Oreos put the icing on the cake.. or the crust on the cheesecake. hahaha. See what I did there?

When Are Blackberries in Season?

Depending on where you live, blackberries ripen in June through August. They ripen earlier in Southern states, and later in the season in the Midwest and North.

The only thing that I can't stand about blackberries are the seeds. Does anyone else have a deep love for fresh blackberries or raspberries, but can't deal with crunchy seeds? I know I can't be the only one. If you're one of those people, I've got you covered. Since I, too, cannot stand the seeds, I cooked the blackberries and strained them out, leaving a silky smooth blackberry sauce.

How to Make Blackberry Sauce for Cheesecake

Strain the blackberries to separate the seeds from the juice with a fine-mesh strainer. Use a spatula and press the pulp through the strainer. Discard the seeds.

Rinse the saucepan out to make sure all of the seeds are gone and add all except ¼ cup of the blackberry sauce back into the saucepan.

This blackberry sauce recipe would also be perfect on a no bake lemon cheesecake recipe.

How to Make Swirled Blackberry Cheesecake

Add the cream cheese into a large mixing bowl. Beat until there are no lumps. This is especially a good idea if your cream cheese is not fully up to room temperature.

Next, add in the sugar and beat until creamy.

Add in the eggs one at a time and beat until each egg is worked in. Scrape down the sides and bottom of the bowl after each egg to make sure that any bits of cream cheese and egg are worked in to avoid lumpy cheesecake.

Add in the sour cream, heavy cream, lemon juice, and lemon zest. Beat just until everything is combined.

Place the cheesecake in a water bath and bake.

My cheesecake has cracks in it. What happened? This is happening because we're swirling a blackberry sauce into the cheesecake recipe with a skewer or butter knife. The two textures are different and naturally cause some cracks. The more you spread the sauce out, the smaller the cracks will be.  It's perfectly fine to have these cracks, but if you're that upset by it, make a second batch of blackberry sauce and fill in the cracks with the sauce.

Can I leave out the lemon in the homemade black cheesecake? YES! Make it purely a vanilla cheesecake by excluding the lemon juice and lemon extract. I would add 2 teaspoons of vanilla extract instead. 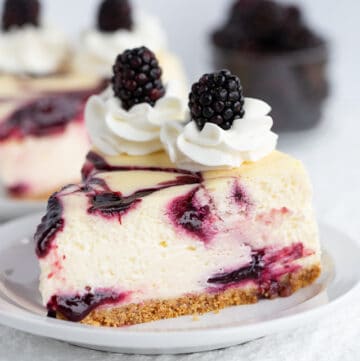 This Blackberry Cheesecake recipe post was originally posted on September 16, 2014.