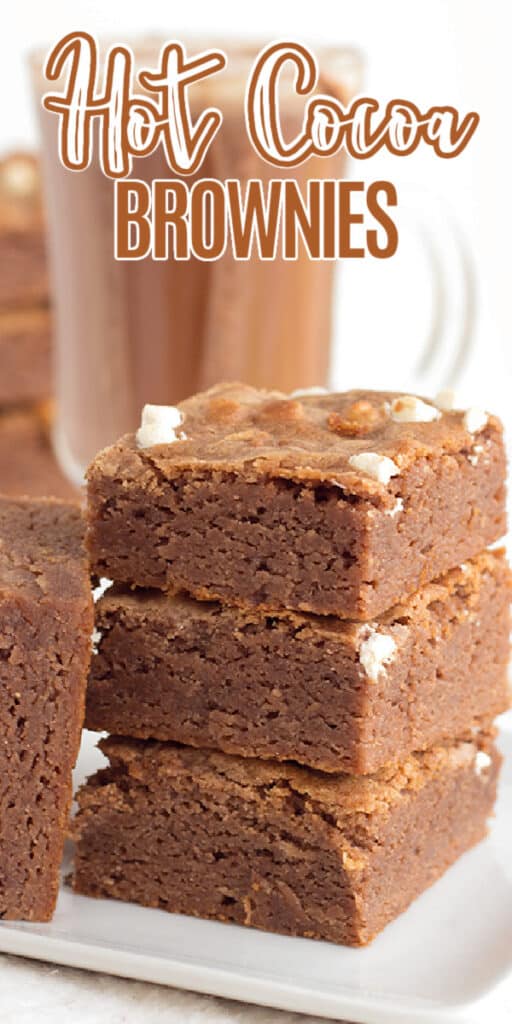 Hot Cocoa Brownies are chewy brownies, packed full of hot cocoa and tiny marshmallows bits. Make this easy cocoa brownies recipe and enjoy them with a mug of hot chocolate!

This hot cocoa brownies recipe is made using packets of hot cocoa! Homemade hot chocolate is great, but instant hot cocoa allows me to relive my childhood at my Gram's house. You know, the powder that comes in the little envelopes that you add some hot water or milk to. YUM!

Are you looking for hot cocoa-inspired desserts?

I have Hot Cocoa Meringue Cookies that are a meringue cookie with hot cocoa mix and chocolate chips folded into them. They're SO good!

Hot Chocolate Fudge is another great sweet treat with hot cocoa mix in it! If you love fudge, you have to try this recipe!

So the thing I think I adore the most about these chewy marshmallow brownies is the crispy, shiny crust and the bits of marshmallows. If I had the entire pan of homemade brownies to myself, I could see myself scraping the tops off the brownies and eating them first. Don't worry, I didn't have a chance with other family members in the house scarfing them down.

These brownies aren't a rich dark brown color because I didn't load them up with cocoa powder. I wanted the hot cocoa flavor to shine through so I just added more hot cocoa instead of cocoa powder. I also added the tiny mallow bits into the batter and I think that added another layer of chewy.

As with most brownie recipes, this recipe only requires basic ingredients plus the hot cocoa mix and the tiny marshmallow bits. Let's run through them quickly.

Get the exact measurements in the recipe card at the bottom of the post.

How to Make Hot Cocoa Brownies

As with most brownies, this recipe is quick and simple. It's a one bowl brownie mix and it takes no time at all to throw together.

Step 1 - Add the cooled melted butter, sugar, eggs, and vanilla extract to a medium mixing bowl. Beat with an electric mixer for 1 to 2 minutes until pale and thick.

Step 2 - Add in the cocoa powder mix, flour, and baking powder. Beat on low until the dry ingredients are worked into the batter.

Step 3 - Stir in the mallow bits until evenly distributed.

Step 4 - Pour the brownie batter in a greased and parchment-lined 8x8 square pan and evenly spread out. Sprinkle the remaining mallow bits on top and bake.

How to Store Brownies

Are cocoa powder and hot cocoa mix the same?

Can I use mini marshmallows instead of mallow bits?

You can if you can't find the mallow bits, but I highly recommend looking for them.

Can I freeze Hot Cocoa Brownies?

Yes! Let the brownies cool completely and remove them from the pan. Tightly wrap the brownies in two layers of plastic wrap and then heavy-duty foil. Place in a freezer bag and store up to 3 months in the freezer.
You can also slice the brownies, but with more edges that are exposed, the more likely you'll have some brownies with hard edges after they've thawed. If you only have a few leftover brownies from the pan, you can wrap them individually with two layers of plastic wrap very tightly. Wrap with a layer of foil and then pop in a freezer bag to store for up to 3 months.
To thaw, place the pan of brownies or slices in the fridge overnight. You can also leave them out at room temperature for 30 minutes to an hour to thaw.

Brownies and Bars to Try 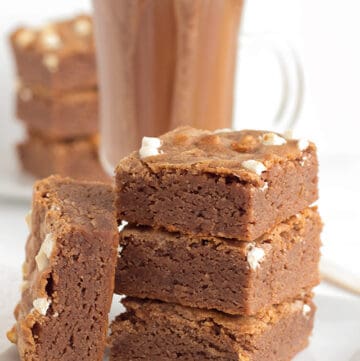 The recipe initially called for 4 hot cocoa packets, but I find that 5 gives it a more dense brownie texture and a little extra hot cocoa flavor. 4 packets still work perfectly too.

This post was originally posted on February 26, 2016. It's being updated February 2022 to add additional information and tweaks to the brownie recipe.