This easy pull-apart Cinnamon Roll Monkey Bread is made with canned cinnamon rolls and coated in a cinnamon and sugar mixture. This monkey bread makes the perfect holiday breakfast or just a treat for the family to pick at any time of the day!

I have found a very easy way to make fantastic cinnamon roll monkey bread. This recipe is easy enough to make on busy weekday mornings. It is a breakfast that everyone in your house is guaranteed to devour. Let me tell you all about it!

What is Monkey Bread?

Monkey bread is a soft, sweet, and sticky breakfast pastry made with bread dough, butter, cinnamon, and sugar.

The pastry was first created as a way to use up leftover scraps of dough. Small dough scraps were tossed in melted butter, cinnamon and sugar and then baked in a bundt pan or cake pan. The end result was a sweet bread that you could pull apart with your hands.

Monkey bread got its name because you pull off pieces of the bread with your fingers, just like a monkey would do- no utensils required!

How to Make Monkey Bread with Cinnamon Rolls

Unless you bake a lot of homemade bread or work in a bakery, you might not have extra scraps of dough laying around. Rather than use bread dough scraps, you can simply use store bought cinnamon roll dough instead.

Step 2 - Mix the cinnamon and sugar together in a large bowl. Cut the unbaked cinnamon rolls into quarters and toss them into the bowl of cinnamon sugar.

Step 3 - Place the coated dough into the prepared bundt pan, piling the dough on top of the melted butter and brown sugar.

Step 4 - Bake the cinnamon roll monkey bread in your preheated oven. Let the monkey bread cool for just a few minutes in the pan and then flip it out.

PRO TIP: Flipping the monkey bread out of the pan while it’s still warm prevents it from sticking to the bundt pan- its a very sticky bread!

Step 5 - Drizzle the monkey bread with frosting from the cinnamon roll package.

Once your cinnamon roll monkey bread is baked and iced, it is ready to enjoy! Sure, you can cut slices of the bread with a knife but I prefer to pull off chunks and pop them right into my mouth. That is the beauty of a monkey bread after all!

What Cinnamon Rolls to Use

For my cinnamon roll monkey bread recipe, I like to use Pillsbury Grands. They are big and flaky which bakes into large, fluffy pieces of monkey bread. The big pieces bake together nicely to make a cohesive looking bread but they still pull apart very easily.

You really can use any kind of cinnamon rolls that you’d like. However, if you use the smaller sized rolls, I recommend getting 4 tubes rather than just 3. The smaller tubes of refrigerated cinnamon rolls are significantly tinier and you will need more dough.

How long does monkey bread last?

Monkey bread will keep for about 3-4 days at room temperature. Wrap the monkey bread tightly in plastic wrap and keep it on your kitchen counter. Another great idea is to use a cake holder. It is easy to pull a piece off and pop it into your mouth when it’s conveniently on your counter, too!

What should I use the frosting that comes with the cinnamon rolls for?

Do you have to use bundt pan for monkey bread?

Can I add nuts to this cinnamon roll monkey bread recipe?

You definitely can add nuts to this cinnamon monkey bread recipe! Chopped pecans are my favorite but any kind of nuts will work.
As you add the cinnamon sugar coated dough pieces to the bundt pan, sprinkle nuts in between the dough pieces. I would recommend using about 1 ¾ cups of chopped nuts for this recipe. More than that and the dough pieces may not bake together quite as well and cause your monkey bread to fall apart.

If you're looking for Homemade Monkey Bread, I have just the recipe for you. Whip up your own dough with this recipe.

Don't have an oven available? This Instant Pot Monkey Bread recipe gives simple instructions on how to cook your monkey bread in a pressure cooker.

Lastly, this Easy Monkey Bread is made with regular store-bought canned biscuits and not cinnamon rolls. They is made very similar but have different 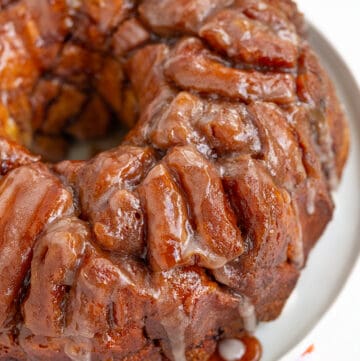