These Christmas Gnome Cake Pops take some time to make, but everyone will love them because they're so cute. The cake pops are made with cake mix, homemade frosting, sugar cones, and lots of almond bark and candy melts. The mini dehydrated marshmallows make the cutest little beard too!

I know gnomes seem to be crazy this year. I actually made these 2 years ago when one of the gnome cartoon movies came out and after much thought on if they're too complicated to post or not, I'm just going to go for it anyway.

This probably won't be for everyone and that's okay.

To make these gnome cake pops, you're going to need more almond bark and candy melts than anything else.

These cake pops only require a couple of tools, but they're pretty important. These Christmas gnomes may be hard to make without them.

How to make Cake Pops

To make the cake pops, first you'll need to make the cake. Add the cake mix, eggs, and water to a bowl and beat until combined. Skip the oil and no need to substitute the oil for anything else.

Spray a 9x13 baking pan with a nonstick baking spray that doesn't contain butter. Pour the batter into the prepared pan and bake until done. Let cool completely.

Whip up the homemade frosting by adding the butter, powdered sugar, vanilla, and milk to a large bowl and beating with a hand mixer until light and fluffy.

Once the cake is completely cooled, crumble it up into a clean mixing bowl and add about ¾ cup frosting. You can start with less frosting if you would like.

Beat the cake and frosting together until it looks like a thick cookie dough. Grab your 2 tablespoon cookie scoop and pack the cake pop mixture into the scoop, scrape off any excess so the top is flush with the cookie scoop and place flat side down on a wax paper/parchment paper lined tray.

This is where the real magic begins. Assembling the Christmas Gnome Cake Pops isn't as hard as it sounds but it does take patience.

To start, add a slit to the cake pops near the top of the flat side of the cake pop. Pop the junior mints or M&M in the slit. I would like mine even a little closer to the top but I don't think they're too bad.

You'll also need to melt 1 cup of chocolate almond bark in the microwave to coat the inside of the sugar cones. If the almond bark is too thick, add ½ teaspoon of melted refined coconut oil to the melted almond bark.

Roll the chocolate around inside the sugar cone and then set it flat side down on a piece of parchment paper until dried.

Melt the red and blue candy melts in separate bowls until smooth. If the candy melts seem really thick, melt some refined coconut oil and start adding it ½ teaspoon at a time until it thins out enough to be a dippable consistency.

TIP: Leave the cake pop mixture out of the hats for a light cake pop. These can be quite heavy when they're all put together.

If the candy melts are beginning to harden, microwave them until they're a thin, dippable consistency. Pour the remaining red and blue candy melts in two tall glasses. They'll need to be tall enough for the cones to fit in.

Hold the cones where the hardened candy melts are and dip the rest of the cones into candy melts. Tilt the cup slightly to help get the candy melts higher on the cone.

Tap the hand that's holding the cone to help remove any excess candy melts. Gently place the cone flat side down on the parchment paper/wax paper to finish drying. You may need a skewer to help maneuver the cone.

Once the cones are completely dried, place them back on the ice cream cone baking rack with the flat side up.

Add the white and chocolate almond bark for the gnomes skin together in a microwave-safe bowl. You can darken or lighten his skin by adding more or less chocolate but keep the measurement at 1 ½ cups in total.

Once the almond bark is hardened, dip the cake pop all the way up to the stick flat side down. Tap the wrist holding the cake pop to remove any excess almond bark. This is important so your gnome as a smooth face.

Add extra almond bark if needed to make the dehydrated marshmallows to stick.

You can store the Christmas Gnome Cake Pops in an airtight container at room temperature for up to 5 days.

I haven't tried freezing these cake pops but I'm concerned about the sugar and the mini dehydrated marshmallows becoming soft when thawed. With those concerns aside, you can freeze them for up to 6 weeks in a freezer container and allow them to thaw slowly in the fridge.

Can I use almond bark instead of candy melts and color it?

YES! I would actually suggest this since candy melts can be so finnicky. Without fail, every time I try to use candy melts they're always really thick and hard to work with.

To color almond bark, you're going to need an oil-based gel food color. It will say on that package that it's made for candy.

Can I use store-bought canned frosting?

Yes! Any flavor canned frosting will work great and is less likely to turn the cake pop stick yellow than the homemade frosting. 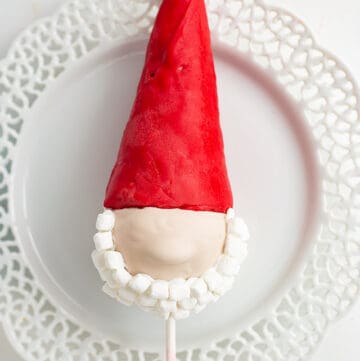 For the Gnome Hats

For the Gnomes Skin