These delicious cinnamon cupcakes recipe is the perfect dessert for a brunch, party, or holiday celebration. These fluffy cinnamon vanilla cupcakes have a swirl of cinnamon in the batter and, of course, cinnamon cream cheese frosting. Each bite is perfection!

Swirling brown sugar and cinnamon in a fluffy vanilla cupcake is topped with a gorgeous cinnamon cream cheese frosting for the perfect finishing touch and a flavor everyone loves.

For the Cinnamon Swirl

How to Make Cinnamon Cupcakes From Scratch

First, get everything ready. I like to pull out all ingredients so I know I'm not missing anything. Then, preheat the oven and line your muffin tin with cupcake liners.

Once this process is complete, you are ready to bake your cupcakes and prepare the frosting. Bake the cupcakes for 16-18 minutes and then cool completely before frosting so that it doesn't melt.

To mix your frosting, begin by fluffing the cream cheese and butter with your hand mixer. Then add small amounts of powdered sugar until it is all fully incorporated. Finish it off with vanilla and cinnamon and mix well. Frost the cupcakes once completely cool to the touch, and then serve.

Start with room-temperature cream cheese and butter. You can pull them out of the refrigerator for a couple of hours before you start baking for the best results. This allows both ingredients to mix well and to fluff up when whipped with air.

Make sure the cinnamon and brown sugar are both evenly distributed for the swirl mixture.

TIP: If you have extra almond flour to use up, try my Baileys Chocolate Macarons, Christmas Macarons, or these Almond Flour Brownies.

What can I substitute for the cinnamon?

If you don't like cinnamon or cannot find it, try all-spice, pumpkin spice, cardamom, or nutmeg.

Will these cinnamon cupcakes work with gluten-free flour?

If I were making these gluten-free, I would start with a good quality vanilla GF cake mix. It's not from scratch, but it's easier to get right.

How do I store these cinnamon cupcakes?

You can keep them in an airtight container in the refrigerator for up to three days. The cream cheese frosting does need to be refrigerated.

Can I freeze cinnamon cupcakes?

Yes. Freeze extra cupcakes in an airtight container for up to three months. The frosting may change in texture but should still taste good.

If you try this recipe, be sure to leave a rating below and also share it on Instagram, and tag me! You can also find me on Facebook and TikTok. 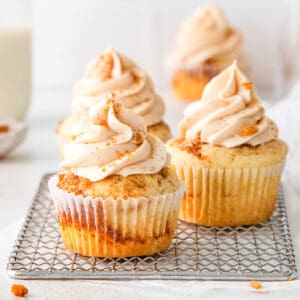