This easy Blueberry Sour Cream Coffee Cake tastes amazing and so quick to put together. It uses a cake mix as a shortcut and has the most amazing cinnamon streusel topping. It's loaded with juicy blueberries too! 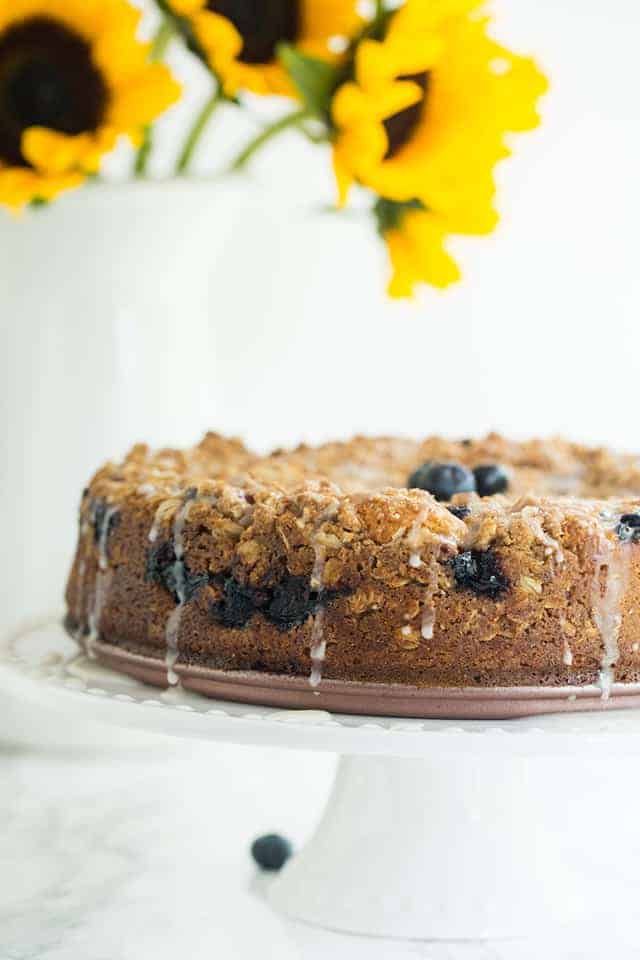 Blueberries won't be in season here in New York for probably another month, but that's not going to stop me from making this amazing blueberry sour cream coffee cake. I've tried this with fresh blueberries and frozen and it works great either way. So if you're like me and won't see an in-season blueberry for another month, grab some frozen blueberries from the store.

I also think a few dollops of cream cheese would make this blueberry coffee cake with cake mix killer. It's just my opinion, but cream cheese can take anything to the next level. Maybe that'll be the next blueberry recipe!

Let's first start out with the cake part of the coffee cake. I'll talk about the streusel coffee cake topping a little farther down. You may notice that this blueberry coffee cake uses a yellow cake mix instead of flour and a leavener.

How to make Blueberry Coffee Cake

Start by adding the cinnamon and sugar into a small bowl. Stir to combine and set aside.

Working in a large bowl, add the dry cake mix and dry vanilla pudding mix. Stir to combine. Add in the sour cream, egg, vanilla extract, and melted butter. You can either stir to combine the ingredients or beat it with a hand mixer until combined.

Stir the remaining cinnamon and sugar into the cinnamon streusel topping. Add the streusel on top of the blueberries. Pop the blueberry coffee cake into the preheated oven for about 50 minutes or until done.

How to make Cinnamon Streusel Topping

Start by grabbing the cinnamon streusel topping ingredients below.

The cinnamon streusel topping comes together really fast. Combine all of the ingredients and start blending together with a fork or a pastry blender. You'll then stir in ¼ of the cinnamon sugar mixture from the cake ingredients above before adding the streusel to the blueberry sour cream coffee cake.

Can blueberry coffee cake be frozen? It can! Tightly wrap the cooled coffee cake in plastic wrap and heavy-duty aluminum foil. To ensure freshness, you could also pop it in a heavy-duty freezer bag as well. It will last about 2 to 3 months in the freezer.

How to store blueberry coffee cake - You can store it in an airtight container for 2 days at room temperature or up to a week in the fridge.

Can I use frozen blueberries? Yes!!

Can I substitute the blueberries for another fruit? Absolutely! Cranberries, raspberries, cherries, blackberries, strawberries and whatever other ones I'm forgetting.

Do you have other blueberry recipes? I do! Blueberry Cream Cheese Danish with Crescent Rolls, Blueberry Almond Shortbread Bars, Easy Blueberry Jam and Blueberry Dump Cake.