Start summer off with a frozen coffee cream pie! The pie is made with a homemade cold brew coffee pudding, cream cheese, and homemade whipped cream! It’s a great pie to make ahead and then partially thaw and serve later!

This post is sponsored by The J.M. Smucker Company. All thoughts and opinions are my own.

I'm a HUGE coffee lover and I think a lot of you are too! Two of my most popular recipes have coffee in them!

My friend turned me onto cold brew coffee a couple of years ago. It didn't take much convincing because without even going into detail about it, I already knew I had to try it. Here's why:

But there are more reasons as to why you should love cold brew coffee especially with the help from Dunkin' Donuts Cold Brew!

How to make cold brew coffee

It comes down to three easy steps. 1. Drop 2. Steep 3. Love to enjoy cold brew at home.

Drop – Drop the coffee (in my case the 2 coffee packets) into 4 cups of water. Steep – Steep 8 to 12 hours. The longer the coffee is steeped, the stronger it will be. Remove from coffee packs or strain the coffee grounds and add 3 cups of water to the pitcher. You can add more or less water for desired strength. Love – Enjoy your homemade cold brew coffee. Customize it with your favorite creamer and sweetener.

Want to get your own Dunkin’ Donuts Cold Brew? It can be found at your local Walmart! It seems to be flying off the shelves so keep on the lookout!  Each box will make 2 pitches of coffee.

For this coffee cream pie recipe, I made a cold brew coffee pudding. I grabbed my recipe for coffee pudding and swapped out the regular brewed coffee for cold brew. I found that I had more control over how strong my coffee was. I wanted my coffee flavor to really pull through in this pie so it was pretty strong.

There is good news if it doesn't pull through as you expected! You can whip a little coffee paste using a very small amount of water and instant coffee to add into the pie later on if you find it's not strong enough. I'll include that in the recipe down below.

Also, you'll want to let your pie to thaw if it's frozen solid. I would recommend placing them it in the fridge for 1 - 2 hours before serving. If it's too thawed, it will become super soft and pretty unmanageable. It may even end up in a pile on your plate.

I used a graham cracker crust with a little extra butter in it to help it stick together since I wouldn't be baking it. To make my crusts, I normally buy the graham cracker crumbs in the box instead of buying the crackers that I have to turn into crumbs myself.

A golden sandwich cookie would also be tasty for the crust. You can easily swap the two. You can substitute the graham cracker crumbs for about 34 - 36 cookies that have been turned into crumbs.

I couldn't add cold brew coffee into the whipped cream, instead I used that coffee paste I talked about earlier. I make a paste using instant coffee and a very little amount of HOT water. Mix it until the coffee granules are dissolved. Using a spatula, scrape it into the soft peaked cream along with some powdered sugar and vanilla. Continue to beat until stiff peaks form.

My whipped cream was slightly over-whipped. You can fix that by adding 1 - 2 tablespoons more of whipped cream. 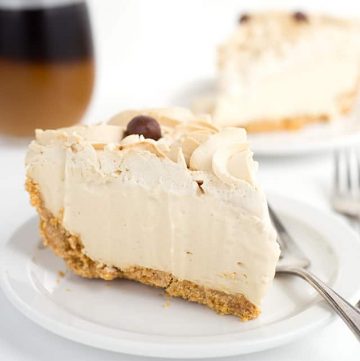