These maple bacon cupcakes are a Father's Day dessert recipe that my husband requested. The cupcakes have maple syrup baked into them along with bits of cooked bacon. It's topped with a swirl of maple frosting and bacon bits. 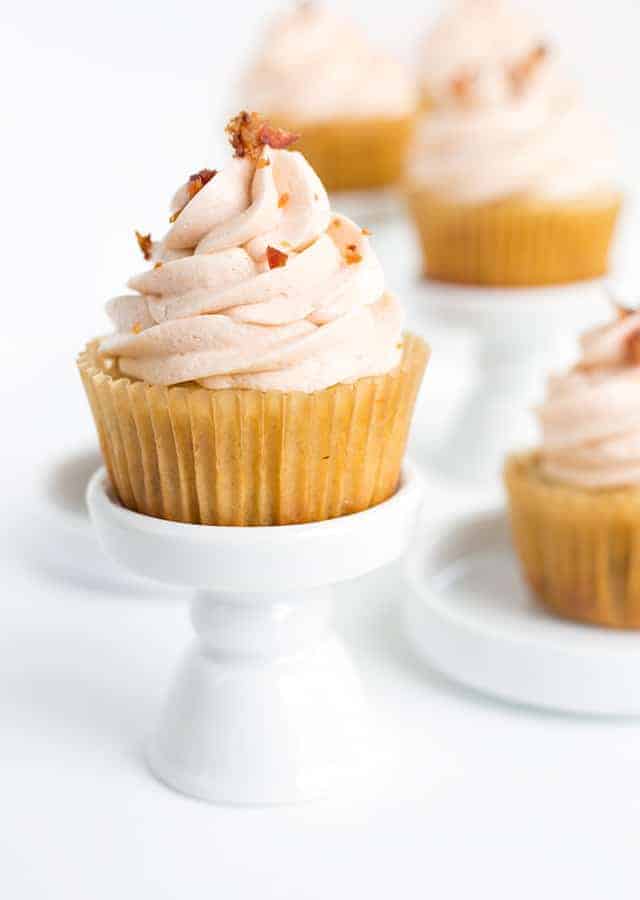 These cupcakes took some testing to get right. I had a family recipe on hand, but it was very dense and left the cupcakes dry and stiff and then I thought I would try both real bacon that I cooked myself and the "real" bacon bits.

Please, don't use the bacon bits for like salads. It totally ruins the cupcakes. They were so salty and tasted of fake smoke. They just weren't edible. 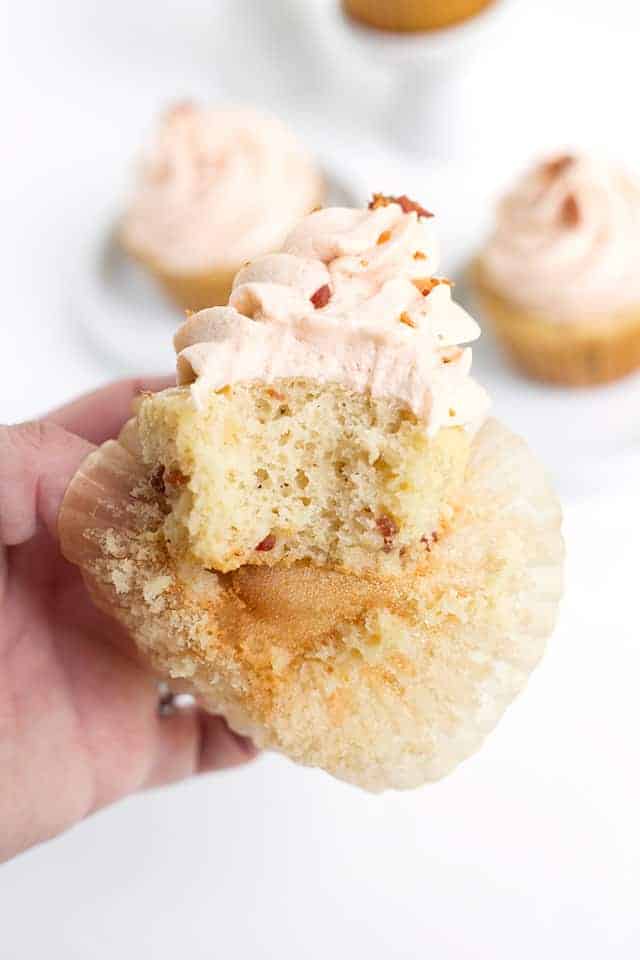 The one thing that annoyed me to no end is that I forgot to grease my cupcake liners. It's not often that you need to grease your liners, so I forgot even though I knew it needed to be done. This particular cake sticks slightly.

I'm pretty sure it's from all of the maple syrup. So when making this recipe, don't be like me and forget. Spray your cupcake liners with non-stick cooking spray. 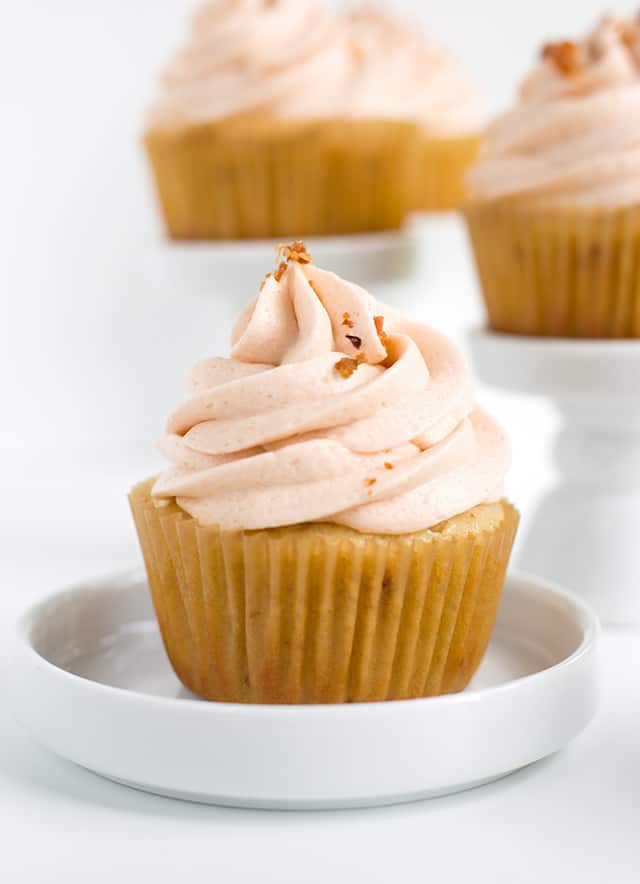 How to make maple frosting

I bet you're wondering whether I used maple syrup or maple extract. Maybe both? Well, I didn't use maple syrup in this maple frosting recipe, because I didn't think about it until afterward.

I think replacing 1 tablespoon of milk with maple syrup would work. Any more syrup would probably leave it too sticky to pipe out.

Instead, I used imitation maple extract. Make sure your butter is soft and add it and all of the other ingredients into a large mixing bowl. Beat with a hand mixer on low until the powdered sugar is somewhat worked in.

Turn the mixer on medium and beat another 1 minute to whip it into a light and fluffy frosting.

How to make maple bacon cupcakes

First of all, cook that bacon up. I normally put mine on a rack that sits inside a baking pan and bake it at 350 until it's chewy or crispy depending on how you prefer yours. It usually takes about 30 minutes and I flip them every 10 minutes.

You can also cook the bacon in a pan on the stovetop. Cook that bacon up however you want to. Lay it on a paper towel-lined plate to drain off any excess grease and let it cool. Chop it into small pieces and set aside.

Pour a cup of milk and start alternately adding the dry ingredients and milk into the bowl. I divided the flour into thirds and the milk in half and that worked out well. 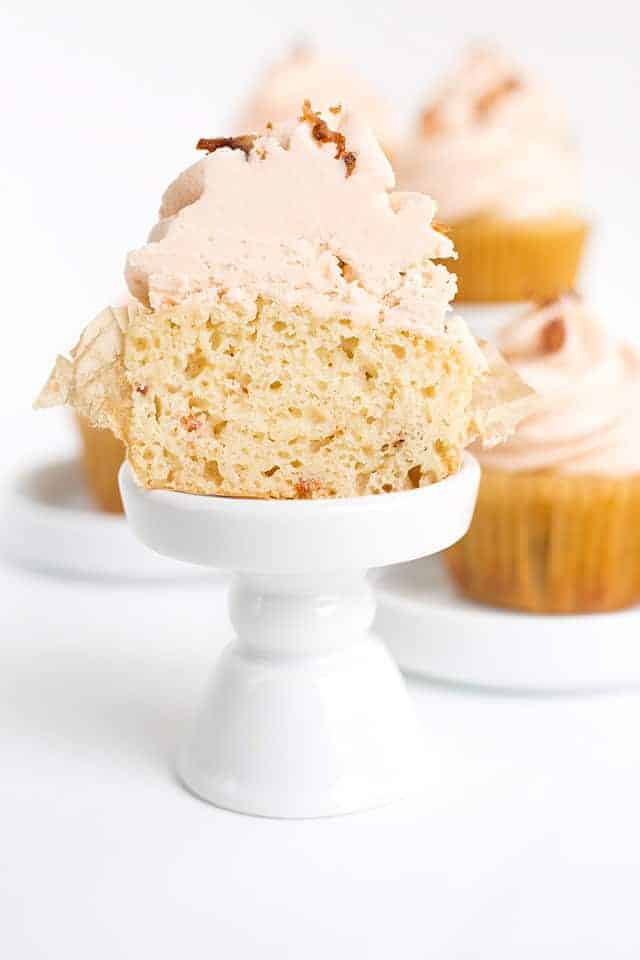 Can I use bacon bits instead of cooking my own bacon? Well, technically you can, but I wouldn't recommend it. It leaves the cupcakes salty and with a fake smokey flavor.

What kind of maple syrup should I use? Your favorite kind. I recommend the real deal, but its expensive and not everyone has access to it. The store-bought maple syrup will work and be sure to use the kind that you like to eat on your pancakes. 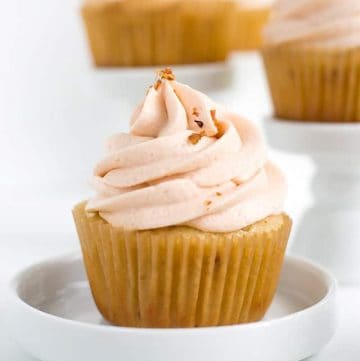