Happy St. Patrick's Day and to celebrate I made you some Guinness chocolate cupcakes with Baileys cream cheese frosting. Normally, I would have jumped on the train with loads of green and rainbow themed desserts and such, but I've been running a little behind. I'm trying to get into a new routine and I feel like it's sucking the life out of me.

Here's a fun fact. Up until last year when I did a roundup on buzzfeed and wrote "St. Patty's Day", I did not know that that is wrong and it really upsets people. I was never, ever taught to write St. Paddy's Day, but trust me that's the correct way. Lesson learned on that one. 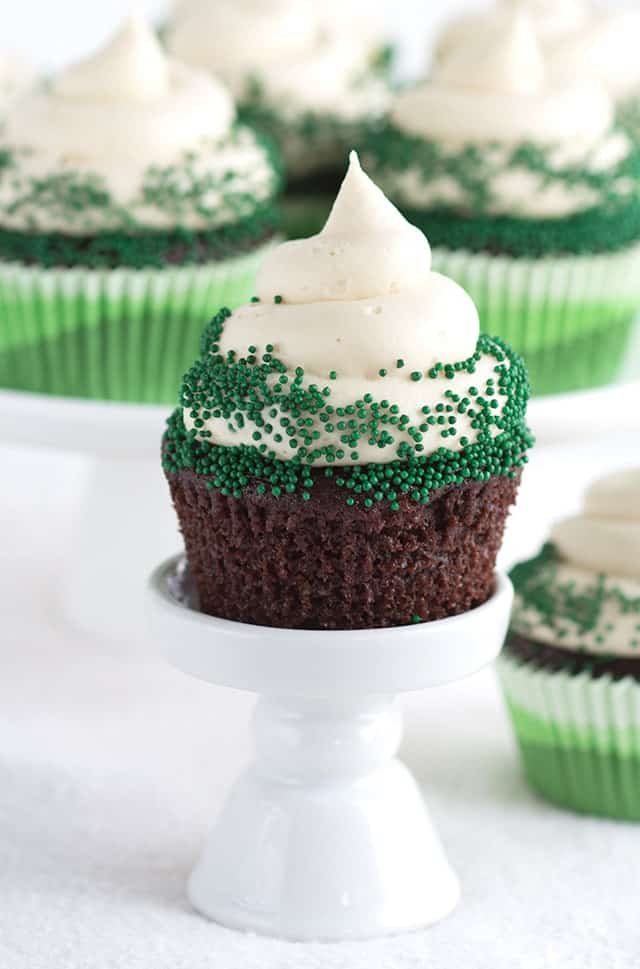 How to Make Guinness Cupcakes

I love these rich chocolate cupcakes. They use an entire bottle of Guinness beer. It kind of annoys me (I'm known to do it in my recipes though 🙁  ) to only use a cup of beer and then the rest either goes to waste or you have to down it. Here's the thing though; the beer needs to be at room temperature and warm beer is never a good thing. If you think warm Coke is bad, it's nothing like a warm beer.

Whew, I got a little off subject. I was saying I love these Guinness chocolate cupcakes. They're so soft and spongy. They're packed full of chocolate and boozy flavor. Maybe it's more of a boozy aroma than flavor, but the addition of beer definitely adds another depth of flavor. Then you have the Bailey's cream cheese frosting. It's so thick and creamy. It pipes perfectly and it tastes perfect.

I felt that the cupcakes were a little plain jane, so I dolled them up with green nonpareils. I searched through huge tubs of sprinkles to find these. I was originally looking for a chocolate sprinkle, but these were even better. I just love how they made the cupcakes just a little bit fancier. Sometimes, it doesn't take much to put a cupcake over the top.

If you plan on frosting your cupcakes generously like I did mine, I would recommend doubling the frosting recipe.
Did You Make This Recipe?Snap a photo and share it with us down below! ⬇⬇

If you love the Guinness cupcakes recipe, be sure to try these St. Patrick's Day recipes, too:

Do you have any St. Patrick's Day traditions? Do you wear green to avoid being pinched?